Check out this handsome guy, his name is Michael Kuzaj and he is the new boyfriend of French tennis player Alize Cornet. Before Mickey here, Alize dated Hugo Nys.

A couple of years ago, we reported Alize was dating Hugo, they are no longer together although they are still friends. Hugo is presently dating French hottie Estelle Mazzega Schneider, and Alize is happily in love with this lucky guy. 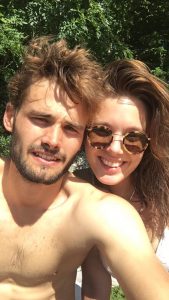 6’2″ Michael Kuzaj was born in Marignane, France; he is the son of Marie and  Christian Kuzaj. He graduated from of Lycee maurice Genevoix in Manignane, France.

Kuzaj subsequently graduated from the University of Mediteranean with a marketing degree in 2012, before attending at the university of Southern Indiana, from where he graduated with a degree in Management in 2013.

Similarly to his famouus famous, Michaekl is a tennis player. During his college years he was named All-GLVC and Academic All-GLVC in 2012 and 2013.

He was reponsible for taking the Screaming Eagles of Souther Indiana to their first NCAA II regional crown and appeaerance in the NCAA II Championships.

After college, Michael worked for C2J as a commercial Assistant, and assistant floor assistant at Decathlon. Subsequently in 2011 was a tennis coach at the Evansville Tennis Center.

He became club manager at Real Padel Club Sophia in Nice in September before becoming president in May, 2015. Kuzaj is also camp manager at Patrick Mouratoglou’s Tennis Academy.

Back in January, 2015 he was Alizé Cornet’s part-time tennis coach on the Tour.