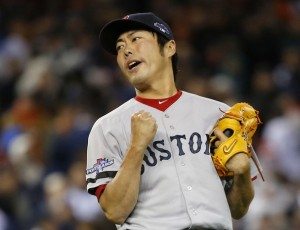 Miho Uehera (Koji`s wife) and Koji Uehara haven’t forgotten 2011. He pitched for the Rangers then, but he didn’t pitch well. The Rangers left Comerica Park heading home, up three games to two over the Tigers in the American League Championship Series….

But we don’t know much about Miho Uehara, all we know that she has not adopted the Hub as her home. Koji and Miho Uehara moved to Baltimore in 2009 when initially coming to MLB. The family stayed there after his deal in Texas in 2011.

Miho and Kazuma stay in Baltimore for a reason. Koji said about this transition:

We like the school my son goes to and he plays sports. It’s [Baltimore] a good city.

I guess Miho feels homesick in the states, who can blame her? The language, the food, relatives…I mean, it is so different and the customs are way distant than the Asian culture.

There is not much of her found on internet so speak your mind if you have juicy stuff about her ;)