Natalie Kalil is the loving wife of NFL player, Ryan Kalil. She became part of the Kalil family in 2008, when she and hubby Ryan, then a player for the Carolina Panthers.

The player’s father, Frank played football for the University of Arkansas and the University of Arizona. He was drafted by the National Football League Buffalo Bills in 1982 and later played in the United States Football League until 1984. His mother, Cheryl (née. Van Cleave), was Miss California in 1981. He is of Lebanese and Mexican heritage, and has two siblings: brother Matt, is a former starting offensive tackle at USC, and was drafted 4th overall by the Minnesota Vikings in 2012. His sister, Danielle, is a model and aspiring singer. His sister appeared in season 13th of American Idol.

Kalil has interests in the film industry, having made claymation films as a child and worked with fellow USC-alumnus Will Ferrell on a football training spoof for the NFL Network.

Prior to becoming Mrs. Kalil, Natalie Nelson was making her own mark. While in college at USC she was a football cheerleader, that’s how she and her man met. 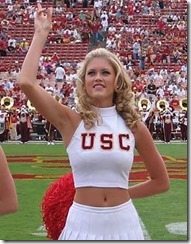 Back in 2006 while Natalie Kalil was a USC Song Bird cheering squad member, she actually went overboard cheering for the wrong team.  USC was playing Texas for the BCS National Championship, and poor Natalie’s image was captured, basically making her the funny story for a while. 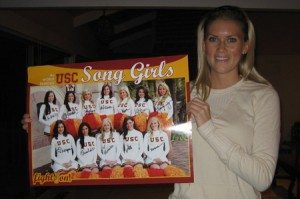 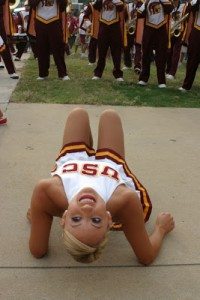 Allegedly before Natalie and Ryan started dating, she dated another football player, NFL linebacker Dallas Sartz who once played with the Seattle Seahawks. But who cares really she is now Mrs. Kalil, before that happened, have you ever read about how Ryan popped the question?

He did it on his birthday in 2007, he told Natalie  he had to go to to the stadium where a photographer was going to take his picture for Sports Illustrated and asked if she wanted to come along, when they arrived, everything was ready for the photoshoot, but then the photographer told them he had to run to his car to get something, so they waited, but while they were talking the lights went off and a video began to play on the scoreboard, not any video a video of Natalie and Ryan.

A stunned yet excited Natalie kept watching and then she turned to look at Ryan who was already on one knee.

Nowadays, Natalie Kalil keeps busy being a mommy for the couple’s two children. She and her husband welcomed daughter, Kenadi and later added to the family a boy, named Chandler.