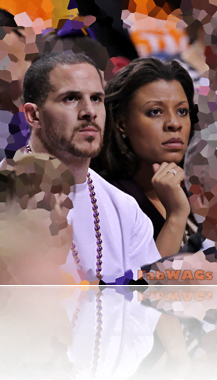 The Lady Tigers at LSU has one hot of a coach themselves Nikki Caldwell, but don’t be fooled by her impressive good looks, she is a toughie and branny!!

Tennessee native Nikki Caldwell 40, was a talented basketball player at the University of Tennessee under coach Pat Summitt, coach Caldwell graduated in 1994 with a Bachelor’s degree in public relations. She began her coaching career four years later as assistant coach for Coach Summitt.

On April, 2008 UCLA named her head coach a year late  she was named Pac-10 Coach of the Year, she arrived at Louisiana State University on April 2, 2011.

coach Nikki Caldwell is not married but she has been dating former NFL player Justin Fargas for a couple of years.

33-year-old Justin Alejandro Fargas was born on January 25th, 1980 to 66-year-old actor Antonio Fargas who portrayed Huggy Bear in the 70’s t.v series Starsky and hutch and  the director of Design and Trend for Expo Design Center and the Home Depot Taylor Hastie.

Fargas graduated from Notre Dame High School in Sherman Oaks, CA, he then studied at the University of Michigan before he transferred to Southern California in 2001.

Fargas was the 96th pick by the Oakland Raiders during the third round at the 2003 NFL Draft, he left Oakland in 2009 and signed with the Denver Broncos on August 11, 2010, but  was released 19 days later.

Justin Fargas  and Nikki announced they were expecting their first child together in 2011 their daughter Justice Simone Fargas was born on March 6th, 2012.