32-year-old Risalyn Burzynski is lovely new wife of NFL player DeAngelo Williams. The couple recently tied the knot in an out of the ordinary ceremony.

Is that time of the year again, where pink ribbons are worn. For DeAngelo isn’t that easy, however he came up with a way to honor his late mother, Sandra Hill, who passed due to breast cancer last year. According to ESPN.com’s Jeremy Fowler, Williams will purchase mammogram tests for 53 women at a hospital in Pittsburgh and Charlotte.

DeAngelo who spent the first nine seasons of his NFL career on the Carolina Panthers, also decided to dye his locks pink color in memory of his late mother.

Williams signed a two-year, $4 million contract last March with the Steelers and left the Panthers with a bitter mouth taste, saying they ignored the death of his mom.

Williams was rated as the best running back in Arkansas coming out of the Class of 2001. He was the 27th overall pick in the 2006 Draft, despite his collegiate success. Throughout his nine-year career so far, his most memorable season has been the 2005 season; when he finished with over 1,500 yards and 18 touchdowns. 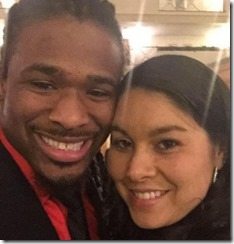 When he is not out there on the field, Williams is a dedicated daddy and a loyal partner.

Risalyn  Burzynski, a San Diego native, has been with Williams for some time now although the two have yet to walk the isle. DeAngelo and Risalyn have been together since they first met in college at the University of Memphis.

Risalyn, graduated in 2006 with a degree in Biology from the University of Memphis.

DeAngelo and Risalyn Burzynski are proud parents of three. The welcomed first child in 2011. Risalyn gave birth to daughter Rhiya Williams, a second daughter followed and she gave birth to a baby boy, in September 2014, becoming the youngest of the bunch.

We can only imagine the support Risalyn provided for her man after loosing his mother last year. 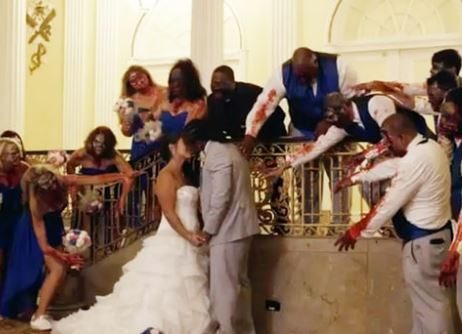 Risalyn and DeAngelo became wife and husband on July 23, 2016 in the Continental Ballroom at The Peabody.

According to reports, the Grand Ballroom was decorated in blue and gray — U of M’s colors –where the couple met. The couple danced along with 350 of their guests.

Now, being the diehard fans of The Walking Dead horror movie that they are; Risalyn and her man decided to have a Walking Dead–themed wedding! Don’t miss the photos.