Jenna Miller is the absolutely stunning wife of NFL player Scotty Miller; her husband is currently a wide receiver for the Tampa Bay Buccaneers. We are going to tell you everything you need to know about Scotty miller, from his parents, where did he go to college, his speed, height, and certainly about his pretty wife Jenna.

“Watching Scotty catch a deep ball is honestly for him than catching an out-route,” Scott Miller said. “It comes naturally to him. He’s done it since he was probably ten years old. That’s what Scotty does. it’s play-maker.”

“It’s unbelievable,” Scott said. “It’s hard to put into words. We’ve been watching this game all of our lives. Scotty is the biggest underdog to make it here. It’s an unbelievable feeling to be apart of this as his family.”

We can go back to his high school stats, Scotty who also ran track finished his stats with  1,500 receiving yards, 28 touchdowns. You can read his college stats below, his stats since he signed with the Tampa Bay Buccaneers are 13 catches for 200 yards, one touchdown, 18 yards in two attempts during  10 games his rookie season.

During the 2020 season, Miller recorded 33 catches for 501 yards, three rushes for 14 yards, and three touchdowns. Miller caught a 39 yards touch pass from Tom Brady when the Buccaneers defeated the Green Bay Packers for the NFC title.

“Let’s go Scooter we love you!” Scotty’s wife Jenna yelled after the game. “You got this! Super Bowl we’re coming!”

Miller played wide receiver and on the special teams, in his first year at Bowling Green, he recorded 7 catches for 29 yards, 4 tackles, 24 kickoffs for 457 yards in 10 games. The following season,  recorded 74 catches for 968 yards, two tackles, 10 kickoffs for 336 yards, and 10 touchdowns in 12 games.

In his junior year, Scotty Miller recorded 1 tackle, 63 catches for 722 yards, four touchdowns, in 12 games. Finished his senior year with 4 attempts for 16 yards, 71 catches for 1148 yards, nine touchdowns in 11 games.

How Fast is Scotty Miller?

What number is Scotty Miller?

Scotty Miller’s number on his jersey is 10; previous Tampa Bay Buccaneers players who wore the #10 on their jerseys’ are Adam Humphries,  the wide receiver currently playing with the Titans and former NFL quarterback Shaun King who played with the Buccaneers from 1999 to 2003. Scotty Miller’s fans can purchase his #10 jersey on the Buccaneers store for $99.99 and for the same price at the NFL Store.

Scotty Miller’s wife is Jenna Miller, they met during their freshman year at Bowling Green, they started dating in April 2016.

“My roommate and I were going around the dorm knocking on doors for candy,” said Rizkalla. “You know, Halloween, trick or treat, to see who was home and if anyone had any candy and when Scotty opened the door it was love at first sight. I think it was mostly because he came out with a big 60-piece bag of candy and I was like, ‘Wow! He is the one!’”

After four years together, he decided it was time to take the next step, therefore on July 12, 2020, at Geneva Lake, he asked Jenna to be his wife. 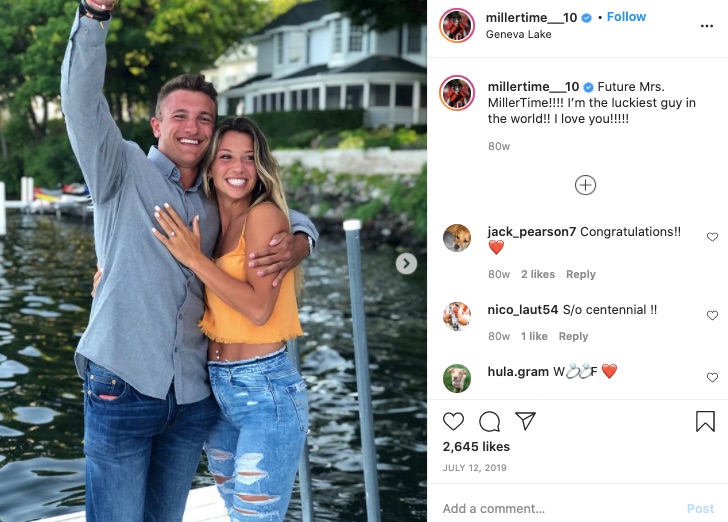 Scotty Miller married his longtime girlfriend Jenna in St. Pete Beach, Florida on June 6, 2020, they originally planned to exchange their vows in Belleville, New Jersey on April 10, 2021, but the Coronavirus pandemic forced them to change plans, they had already canceled their wedding twice.

“It was definitely heartbreaking,” said Jenna, “but we have been getting through it together. There is not too much planning going on right now, just that little ceremony that we have coming up with our immediate family in June and that is it really until probably after the season.” 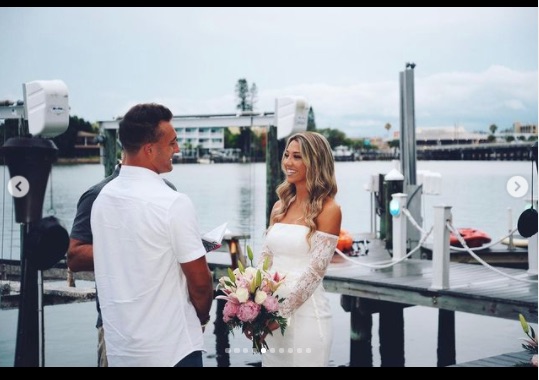 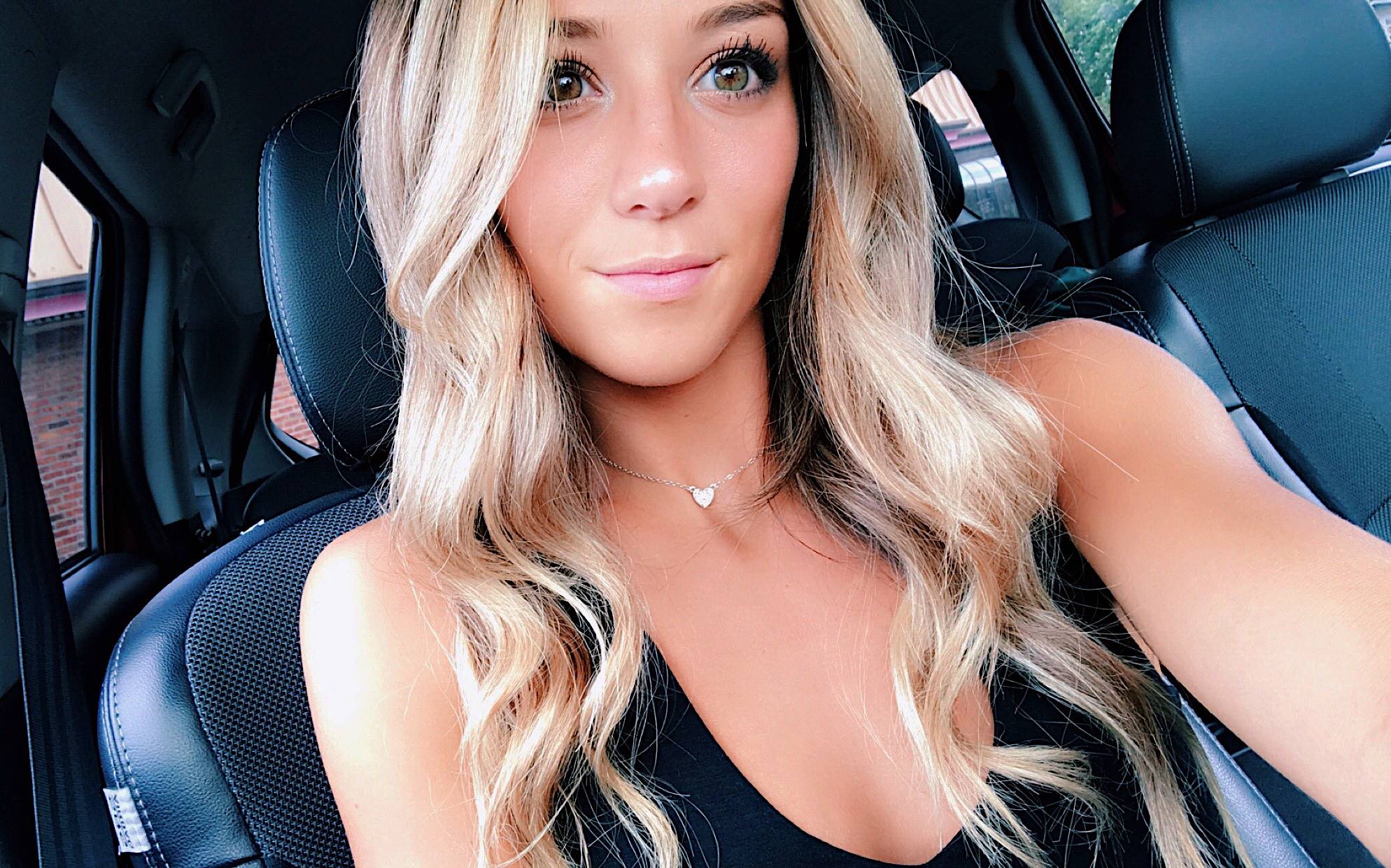 Jenna Miller formerly known as Jenna Rizkalla was born on March 3, 1997, in Westfield, New Jersey. She is one of two children born to Paul and Marie Rizkalla (nee. Scherzo); Jenna has an older brother, Paul Rizkalla Jr., who competed on Michigan’s men gymnastics team before he graduated in 2015, with s degree in marketing, a major in psychology and sales minor. 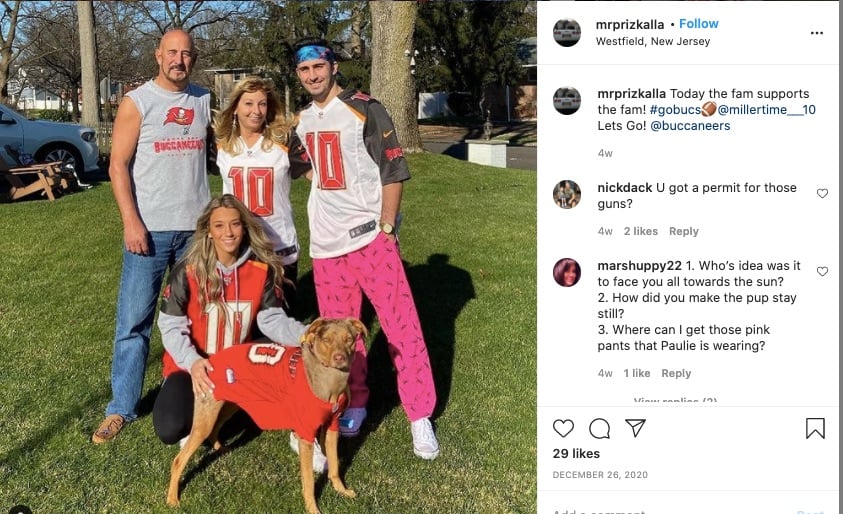 Her brother Paul is the owner of Substance and regional fixed operations manager at Victory Automotive Group. For her part, Jenna graduated from Rutgers University with a bachelor’s degree in sports management in 2019.

Prior to Rutgers, Jenna attended Bowling Green, she was a member of the women’s gymnastics team at both colleges, competed on the balance beam and floor, she was team captain her senior year. Scotty Miller’s wife previously attended Westfield High School.

Jenna helped Scotty with his training when the social distancing started last year. She was Scotty’s quarterback during that time, according to Miller she did a pretty good job.

“Ever since this social distancing started,” said Miller, “we have been going outside almost every day and I try to do all of my different drills out in the backyard.”

“It is a little secret talent of mine,” she said. “Scotty asks me to go out into the yard every day and throw so I have gotten pretty good at it.”

“She does a really good job putting the ball right where I want it,” said Miller. “She makes it hard on me!”