Kara Kavajecz is the stunning girlfriend of MLB superstar, Shane Bieber -a pitcher for the Cleveland Indians.

Kara’s beau happens to be one of the best pitchers in all of baseball and with his model looks, he and gorgeous Kara make for one of the hottest couples in MLB. Just image of these two have babies.

Shane Robert Bieber was born on May 31, 1995 in Orange, California; to parents are Chris and Kristine Bieber. He has one older brother, Travis.
Shane played three years at Laguna Hills High School, in his senior year, he was named Team MVP and made First Team All-League. He was a three-time scholar athlete who finished high school with a 3.48 cumulative GPA.
After graduating high school, he chose to enroll at the University of California, Santa Barbara. Due to his spectacular performances, he earned a place on the 2015 All-Big West Second Team and was drafted by the Cleveland Indians in the fourth round of the 2016 Major League Baseball draft.
24-year-old Bieber has been crushing it in the league since making his debut with the Tribe in 2018; posting a 19-8 record and 4.01 ERA. 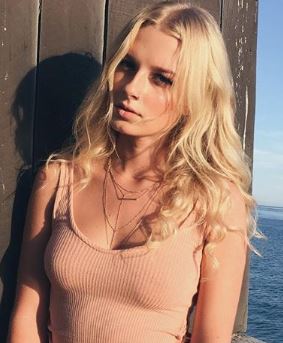 Is safe to say he is also living his best life next to gorgeous girlfriend, Kara Kavajecz. The two met while attending UC Santa Barbara and have been an item since 2017.

21-year-old Kara gradauted with a Communications degree from UC Santa Barbara earlier this year. The blonde who boasts a fantastic figure, was an athlete while in high school. Kara who attended Fortuna High School played both basketball and volleyball. She graduated in 2016.
According to social media Kara Maxine Kavajecz is orginally from Carlotta, California and currently resides in Santa Barbara, California. She has two sisters including Karly Kavajecz and a younger brother. Her mother’s name is Heidi Olsen.