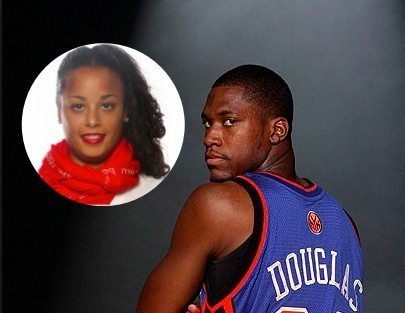 Sherrice Douglas is the NBA Wag and the pretty wife of Toney Douglas, the NBA point guard with the Cleveland Cavaliers. He also played with the New Orleans Pelicans, the Rockets, Knicks, Warriors, Sacramento Kings and the Miami Heat.

Prior to his NBA career, Douglas played college basketball at Auburn and Florida State University.

Sherrice’s talented husband was born in Tampa, Florida on March 16, 1986. He is one of the children born to Stephanie and Harry Douglas, also proud parents of Toney’s older brother Harry who is a wide receiver for the Tennessee Titans.

From Florida to Georgia

The Douglas moved to Jonesboro, Georgia when Toney was still a little boy. He attended at Jonesboro High School and then to Auburn before transferring to Florida State in 2005.

Toney was drafted with the 29th overall pick in the first round of the 2009 NBA Drtaft by the Los Angeles Lakers, who sold his rights in exchange for a second-round draft pick in 2011 and $3 million in cash considerations to the New York Knicks.

The following year, Douglas joined the Miami Heat and a year after that he joined China’s basketball team the Jiangsu Dragons.

He played in 35 games with the Dragons averaging 19.1 points, 4.8 rebounds, 3.3 assists and 2.1 steals per game. By February, 2015 he was back in the US, the Pelicans were the team he signed a new contract with. Between the 2015-2016 season he was signed and waived by the Pacers, the Nuggets and twice by the Pelicans.

The Cleveland Cavaliers came to his rescue on October 3rd, 2016.

With that said, shall we move on to his lovely wife Sherrice?

Sadly, there isn’t much info out there about her, so far we know that Mrs. Douglas was born Sherrice LaDonna Bryson on October 24, 1984. She met her husband in college.

We met while we were in college. He was really interested in me at the beginning and after some time and persistence he won me over.

Sherrice and Toney welcomed their adorable son Toney Jr. in May, 2012.