Dywane Wade one of the star player with the Miami Heat, was named the 2006 Sportsman of the Year by Sports Illustrated, he played an important role at this year NBA Championship, he is wealthy, handsome and is currently dating actress Gabrielle Union, but he  has been in quite nasty legal battle with  his ex-wife and mother of his children Siovaughn Funches-Wade for way too long.

She accused Wade and Ms. Union of inappropriate behavior with his girlfriend in front of the children in 2010, Siohvaughn sued Gabrielle for 50,000 in damages after she alleged has caused her two children emotional distress, Wade denied those allegations and Gabby’s attorney said every claim was false.

“I am deeply saddened and disappointed that Siohvaughn has used our sons once again as pawns and is now lashing out at Gabrielle, who is an innocent party,” Wade tells TMZ.com. “It is clear that this is a desperate attempt to retaliate against me for seeking sole custody of our children and requesting that the court have her undergo a psychiatric examination.”

Wade asked a Chicago judge to suspend the rights of his ex-wife Mrs. Siovaughn Funches to see her two sons, after an incident in which Funches delayed the return of Wade kids to his custody provoking her arrest.

Funches who said has her Christian principles from her mother Darlene Funches, an excellent student at school, Siovaughn Funches was born September 6, 1981, her mother Darlene Fucher is a computer graphic designer for the Environmental Protection Agency, and her father Frank Funches worked as a landscaper. Siovaughn has one older sister named Garrica LeAnna Woods who used to live near their house. Siovaughn’s parents separated without divorcing when she was only 3 years old.

Siohvaughn lived in a small rural suburbs where crime and poverty, was just around the corner, located at south of Chicago.

Her academic records were surprising, for been on the honor roll several times, she has been participant of many extracurriculars academic achieve clubs and won many academic awards, Siohvaughn’s now a business owner and president of Siohvaughn Wade Ministries, she is Christian Counselor, Scholarship Philanthropist, few years ago she has become a Ph. D. in Theology and also she is an author of  a book.

And not just that, Siohvaughn is accredited with having earned Certification for Domestic Violence Training for the state of Illinois, and Abuser Intervention.

In Siohvaughn’s love life, she met Dwyane T Wade Jr. when they were teenagers, after a while they got married in 2002. They had two children together Zaire and Zion Wade in 2007.

Siohvaughn and Dwyane separated and finally got divorced in June, 2010. Unfortunately for Siohvaughn her ex-husband Dwyane was granted the custody of their sons in March 2011, She appeals were dismissed in December same year and the couple had to return to court in September in an attempt to complete the financial terms of divorce. 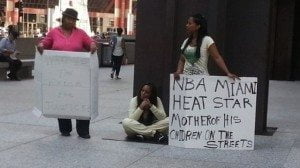 In July, 2013 Siovaughn seated in the streets of Chicago with two female companions who hold signs accusing Wade of not paying a dollar in spousal support for a while leaving Funches living in the street.

You can find more about Siohvaughn Funches-Wade in here