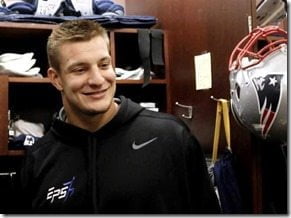 We know the highest paid tight end in NFL history Rob Gronkowski is relentless with the ladies. Born in May 14, 1989; the 24-year-old was born to play football, according to his Facebook profile, but we’ve also seen him at his best to prove it.

It helps that he’s grown to a robust 6 feet 5 1/2 inches, 265 pounds, but with his genes, it would seem he had no choice.
Gronkowski, an Arizona tight end whom the Patriots made the 42d pick in the NFL draft last night, has a father, Gordon, who was a starting offensive lineman at Syracuse for three years; a brother, Dan, who played tight end at Maryland and is with the Detroit Lions; and another brother, Chris, who was a teammate of his at Arizona.
To select him, New England made its customary trade, though this time trading up, from No. 44 to 42, switching spots with Oakland and giving the Raiders the 190th pick.

Gronkowski came to New England for a predraft visit, meeting with coaches. A New York native who graduated from a Pennsylvania high school, Gronkowski entered the draft despite only playing two seasons of college ball. He missed the 2009 season after undergoing back surgery. As a true freshman in 2007, Gronkowski recorded 28 receptions for 525 yards and six touchdowns. His 18.8 yards per reception average was the best on the team and his receiving yards were a then school record for a tight end. He was named a The Sporting News freshman All-American, Rivals.com freshman All-American, The Sporting News freshman Pac-10, and All-Pac-10 honorable mention player.

But what about his personal life? Rob has also made sure he is a favorite of the ladies, having several hookups! 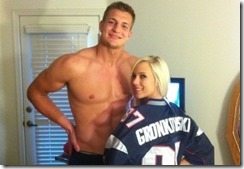 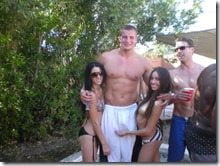 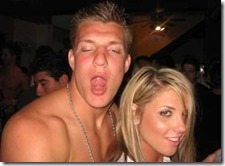 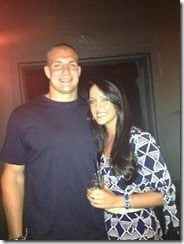 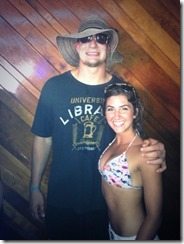 The wild side however, has been tone down. His past lifestyle, which included partying with stars, being paid appearance fees to drink with coeds, drinking and dancing after the Patriots’ Super Bowl XLVI loss to the Giants and posing nearly-nude for ESPN The Magazine’s “Body Issue.” Seems to be growing up?? 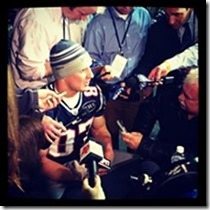 Do you think he is ready for a nice, committed and mature relationship?? Who will dare to try? Think there is someone already occupying the title? We have to give to him, he has certainly enjoyed the partying lifestyle but, he also has a big heart. I mean, not everyone agrees to shave their heads for a good cause right!

So what do you think of his latest stunt? According to online reports The New England tight end — who seems to find trouble during his downtime; was caught on camera making some insensitive remarks about Asians during a Sunday Night Football viewing party in Foxborough.

Don’t miss the video below!