Hassan Childs is a college football player with the University of South Florida. The Florida native previously played for the Osceola High School team.

Hassan currently a senior, plays as a Defensive Back for the South Florida Bulls football team. The 22-year-old was said to have been injured during a shooting. According to a statement from USF, he is in stable condition. The statement also said there is an ongoing investigation after Childs was hit three times, in what it steamed from an apparent road-rage incident.

While in high school he was selected to play in the Central Florida All-Star game. He also ranked 41st in the Orlando Sentinel’s Super 60 and was a second-team 7A all-state selection by The Associated Press as a senior.

During his first year at USF in 2013, he appeared in six games and started the final two games of the season at safety. In 2014 Childs saw action in all 12 games.

He missed the entire 2015 season due to a knee injury. Fully recovered he came back in 2016 and registered 16 tackles in five games, with a career-high five tackles against East Carolina and Navy.

The USF senior safety is clearly lucky to be alive, aside from his immediate family, would there be anyone else worrying about his wellbeing? Perhaps a girlfriend?

Though Hassan appears to be single at the moment, he is seen in pictures with a number of ladies and is also listed on social media as being ‘married.’

Though we know Facebook statuses can’t be trusted, there is one young lady in particular, that seems closest to the young player.

Her name is Taja Collier. Bear with us for a quick sec, and lets assume these two are dating. Accoridng to her social media info, pretty Taja was born August 5, 1997 and is originally from Kissimmee, Florida, the same as Childs. 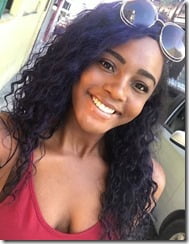 Another possible theory could be the fact that, Childs and Collier used to date but are no longer together, after all their photos date from about two years ago. And since, we are taking wild guesses, what if they are still in a relationship but just not ready to make it public?

How about it peeps, let us know what your guess would be below!