Anita Ruthling Klaussen is the wife of now late, Bud Collins. Reports say her husband died on March 4th in Massachusetts at age 86.

The tennis Hall of Famer, journalist and sports broadcaster, known as much for his outlandish outfits as for his vast knowledge of tennis lore, died Friday at his Brookfield, Mass. home; the Boston Globe reports.

Born in Lima, Ohio, Arthur Worth Collins Jr. grew up in Berea, a suburb west of Cleveland. He had a bachelor’s degree from Baldwin-Wallace College, and after a stint in the Army, he attended BU while working part-time at the Boston Herald.

Collins began his journalism career writing for several Boston-area newspapers, and then moved over to television coverage of tennis for CBS and later NBC. He was a fixture on broadcast television tennis coverage from 1968 to 2007, and then moved to ESPN and satellite radio. He also wrote a tennis encyclopedia and a history of the game.

His longest and most visible venue was at NBC from 1972 to 2007, notably with the “Breakfast at Wimbledon” broadcasts.

Bud Collins is survived by third wife, Anita Ruthling Klaussen. He is also survived by one daughter: Suzanna Mathews through his first marriage, to Palmer Collins –which ended in divorce.

He was also in a relationship with Judy Lacy –who died of a brain tumor. With her, Mr. Collins raised her son, Rob Lacy.

Mr. Collins went on to marry, Mary Lou Barnum, an English teacher, in 1986. She died of brain cancer four years later. Through his marriage to Mary Lou Barnum, he became the stepfather of Betsy Bartelt, Kristin Hunt, Sharon McMillan and Gretchen West. 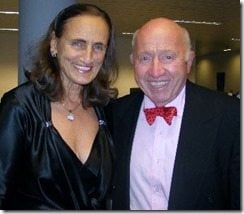 According to her website, Anita Ruthling Klaussen, grew up on a ranch in Tesuque, NM just north of Santa Fe.

She described her idyllic childhood as “having no electricity or running water, in order to be bilingual we spoke only Spanish at home, slept outside, even in the winter snows, raised our own vegetables and fruits in a large garden, had goats for milk, chickens for eggs and the occasional roast”  Anita Ruthling Klaussen was home schooled.

But eventually attended Boston University, graduating in 1960. After college she joined The Peace Corps in 1962-63, and lived in Caracas, Venezuela.

About her 22-year marriage to Bud Collins, she says it gave the couple the chance to travel to “amazing places all over the globe. It has enabled me to photograph beautiful places.  What a joy it has been!”

Anita Ruthling Klaussen is the mother of two children from a previous marriage, she has a daughter, Danielle Klaussen; and a son, Karl Klaussen.

We send our condolences to Anita Ruthling Klaussen and the rest of Bud Collins family and friends.