Meet the lovely Demiko; she is the beautiful girlfriend of NBA player Anthony Morrow. He is a shooting guard for the Chicago Bulls. He was traded by the Oklahoma City Thunder at the last minute with Joffrey Lauvergne and Cameron Payne, to the Chicago Bulls in exchange for Taj Gibson.

Morrow has had an agitated NBA career ever since the Golden State Warriors selected him after the 2008 NBA Draft.

He joined the New Jersey Nets in 2010, and The Atlanta Hawks two years after that. The Hawks traded him to the Dallas Mavericks in February 2013 and signed with the New Orleans Pelicans five months later.

Subsequently, in July 2014, signed a $10 million, three-year contract with the Oklahoma City Thunder.

So far, we know Morrow’s girl simply as Demiko, could be Demiko Suge. Either way, she is @mssuge12 on Instagram, and the proud mother of Anthony’s three handsome boys; four-year-old Kaeden and twin boys Amiri Jace Morrow and Malachi Josiah Morrow born in October 2016. Anthony is also the proud daddy of his beautiful daughter A’Niyah Morrow, 8. 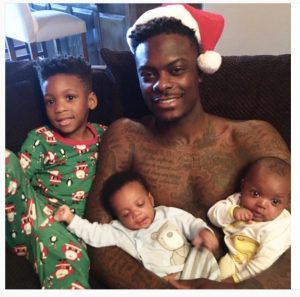