Brooke Stewart is the super hot girlfriend NFL player Larry Fitzgerald. Her 32-year-old boyfriend, currently a wide receiver for the Arizona Cardinals, is being described as being too nice!

According to a Wall Street Journal story, Fitzgerald has a unique take on in-game banter. Instead of trash-talking his opponents, he is super nice, which in result, throws opposing cornerbacks off! Here are some of the comment from defensive backs who have fallen, victim to Fitzgerald’s genuine kindness.

The 32-year-old describes himself as a “traveler, philanthropist photographer and father.” There was a time where Brooke’s man wasn’t as kind, apparently.

Larry and his former girlfriend, Angela Nazario, produced one son, Devin. He and Angela –a former cheerleader for the Oakland Raiders –had an altercation back in 2008. As a result, she filed an order of protection against him. 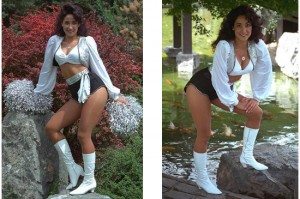 At, the time, Fitzgerald was ordered to stay away from the mother of his son after she filed for an order of protection and accused Fitzgerald of domestic abuse. 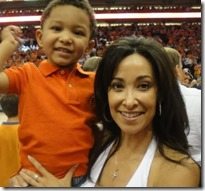 In court documents, Nazario alleged that after the two began quarreling, Fitzgerald challenged her to a play fight. Nazario said she swung at Fitzgerald, who then pushed her. He “grabbed me by my hair with both hands on the back of my head very very hard and tossed me across the room.” When Nazario tried to leave with their son, she said Fitzgerald “grabbed the back of my neck and slammed me down on the marble floor…

Subsequently, she got up, Nazario said she realized Fitzgerald had pulled out chunks of her hair. 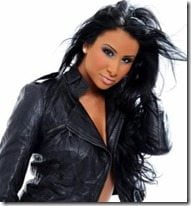 But let’s move on to present times. There’s not much info available on Miss Brooke Stewart.

According to a player profile, she is a former college basketball player. She attended college at Pittsburgh, while in college she and Larry allegedly became an item.

According to social media profiles, Brooke Stewart is currently a VIP Server at Pure Night Club in Las Vegas. She participated in the run for the title of SpyOnVegas’ Sexiest Server. According to her profile, she says about working in Vegas:

Just moved to Vegas, started working at Pure. First table of the night was celebrating a birthday, the head of the table asked me really nicely for party favors. I frantically went around the club looking for New Years Eve’s novelty party favors. Came back with novelty party favors, the look on the guys face was confused. When I asked what’s wrong, he replied this is not the party favors I was looking for. Unfortunately had to have him removed from the club and I learned really fast what that was.