Fabio Fognini is the younger boyfriend of Italian professional tennis player, Flavia Pennetta. 28-year-old Fabio and his 33-year-old gal are keeping busy doing what they do best at the US Open.

Though Fabio will see more US Open action next year, his gal, is currently, seeded 26th, is through to her fifth quarter-final in New York and next plays Czech fifth seed Petra Kvitova on Wednesday for a spot in the last four.

Is not like her man needs much of an intro, Fabio Fognini is also an Italian national and is also a professional tennis player, this two have lots in common, but when it comes to whom gets more attention, his gal might take the lead.

Only because Penneta has been around longer, while she turned pro in 2000 her man followed in 2004. Want to know more about Fabio, keep reading!

2014 was a good year for Flavia, she won the tenth and biggest title of her career by beating albeit injured Agnieszka Radwanska 6-2 6-1 in the Indian Wells final and also began dating Fabio Fognini. The couple sparked the rumor of being an item by posting photos of them together in their social media accounts. 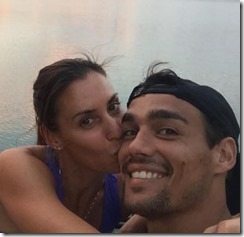 Fabio Fognini was born in Sanremo May 24, 1987. He began playing tennis at age four. He is the son of father, Fulvio, who owns his own company; and his mother Silvana, is a housewife. He is the older brother of Fulvia. He speaks four languages: Italian, English, Spanish and French and besides Tennis he enjoys football and is a fan of Inter Milan and Genoa, his idols are football player Ivan Zamorano, motorbike star Valentino Rossi and football world champion Marco Materazzi.

Fabio Fognini he has no surfaces preference and considers best shots his forehand and backhand, according to his ATP bio.

In Grand Slam tournaments he reached the quarterfinals at Roland Garros in 2011 and the second round at the Australian Open in 2014 and the US Open in 2015.

You can find Fabio Fognini on Instagram here, he also has his own page.