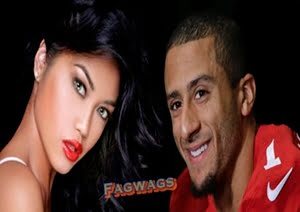 As we know Colin Kaepernick, The SF 49ers star QB is dating model J. Marie Maestre aka J Marie. But that’s not all, Apparently Colin’s love life is full of drama and it stared wend he was dating a woman called Corban Fennel, but Colin broke things off with her some weeks after he started his first NFL game on Dec. 2012.

But that’s not all apparently he quickly replaced her with another girl similar looking.

Colin Kaepernick has rocketed to fame over past few months, and with fame comes money, and that means Colin is changing hot girlfriends in matter of days. But now the question is if he wins the Super Bowl, will his new girl be on her way out?

“No need to beat around the bush, the more famous you are the hotter girlfriend you can acquire. Kap had a pretty cute girlfriend before, but he dropped right after he got the starting gig with Colin Kaepernick.”

J. Marie Maestre(“the Filipina Princess”), was born on December 22 1987, is a girl who grew in Cordord, CA, in 2006 she graduated from Clayton Valley High school, has two siblings, little sister Jona and brother Jeremiah a hot wrestler.

Currently Maestre is a model and lives in San Francisco. Maestre also shows in her official website that she loves Christian Louboutin shoes and beaches.

Few we know about J.Marie Maestre and Kaepernick dates but according to Black Spots Online they are still a couple.

“The guy I fell for isn’t ghetto, is a gentleman and respect a woman. He doesn’t smoke and party and loves helping people out. He is the most humble guy I’ve ever met and made me a BETTER person. We have fun just spending quality time together and going to the movies and he doesn’t need to show off his nice things and brag about how successful he is…”

For other side Kaepernick has to prepares for the biggest game of his life and J. Marie Maestre will support him on his big day against the Baltimore Ravens.