Meet Joanne Gettleman; the wife of Dave Gettleman, the NFL Executive who is currently the General manager for the New York Giants. Prior to joining NY in 2017, he was the GM for the Carolina Panthers.

Joanne Gettleman’s husband Dave, was born and raised in Boston, Massachusetts. He attended Boston Latin School and the University of Miami from where he graduated with a degree in education. Subsequently, received his master’s degree in sports administration from St. Thomas University and a masters degree in physical education from Southern Connecticut State.

His first job was at Spackenkill High School in Poughkeepsie, N.Y, as a teacher and later as head coach; he also was a volunteer assistant at Cal State Long Beach; he became head coach at Kingston High School in 1984.

His landed his first job at the NFL in 1986, as an intern for the Buffalo Bills; in 1993, got a scouting job with the Denver Broncos; in 1997 joined the New York Giants who named Gettleman their pro personnel director; became Senior Pro Personnel Analyst in 2012. The Carolina Panthers hired him in 2013. 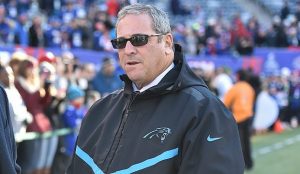 While they were living in Florida, Joanne Gettleman worked as a preschool supervisor for children suffering from cerebral palsy. Aaron Gettleman lives in New Jersey with his wife Melissa.

Sam, graduated from Becker College in 2014 with a Bachelor of Arts (BA) in Interactive Media Design, Game Design, and works as a Support Technician at Berkeley College Information Technology and Services.