Meet  Mrs. Anna Love; she is the beautiful and amazing mother of NFL player Jordan Love, the quarterback for the Green Bay Packers from Bakersfield, California. Prior to the draft, Jordan played college football at Utah State. The Packers selected him in the first round (26th overall) in the 2020 NFL Draft.

As of October 2021, Jordan Love’s net worth has been estimated at $3 million. In addition to his NFL contract with the Green Bay Packers, Love has endorsement deals with Panini, ProActive Sports Performance

Green Bay Packers fan can get their hands into Jordan Love’s Jersey at the Packers Pro Shop for $119.95 and also at Amazon.

On July 13, 2013, Anna Love found herself without her soulmate, raising three kids by herself, her husband committed suicide, but to Anna, her husband Orbin Love was taken by a medical demon.

Days prior to his days, Orbin’s doctor changed his blood pressure medicine, and he started to show bizarre behavior.

“I just wanted the world to know this was not depression,” she said of the obituary mention. “And to know that even though people would find out it was suicide, that it was because of the medication. There is no way Orbin Love would’ve ever considered taking his life. His medicine did this to his mind.”

51-year-old Orbin Love took his life with his service weapon inside his bedroom. 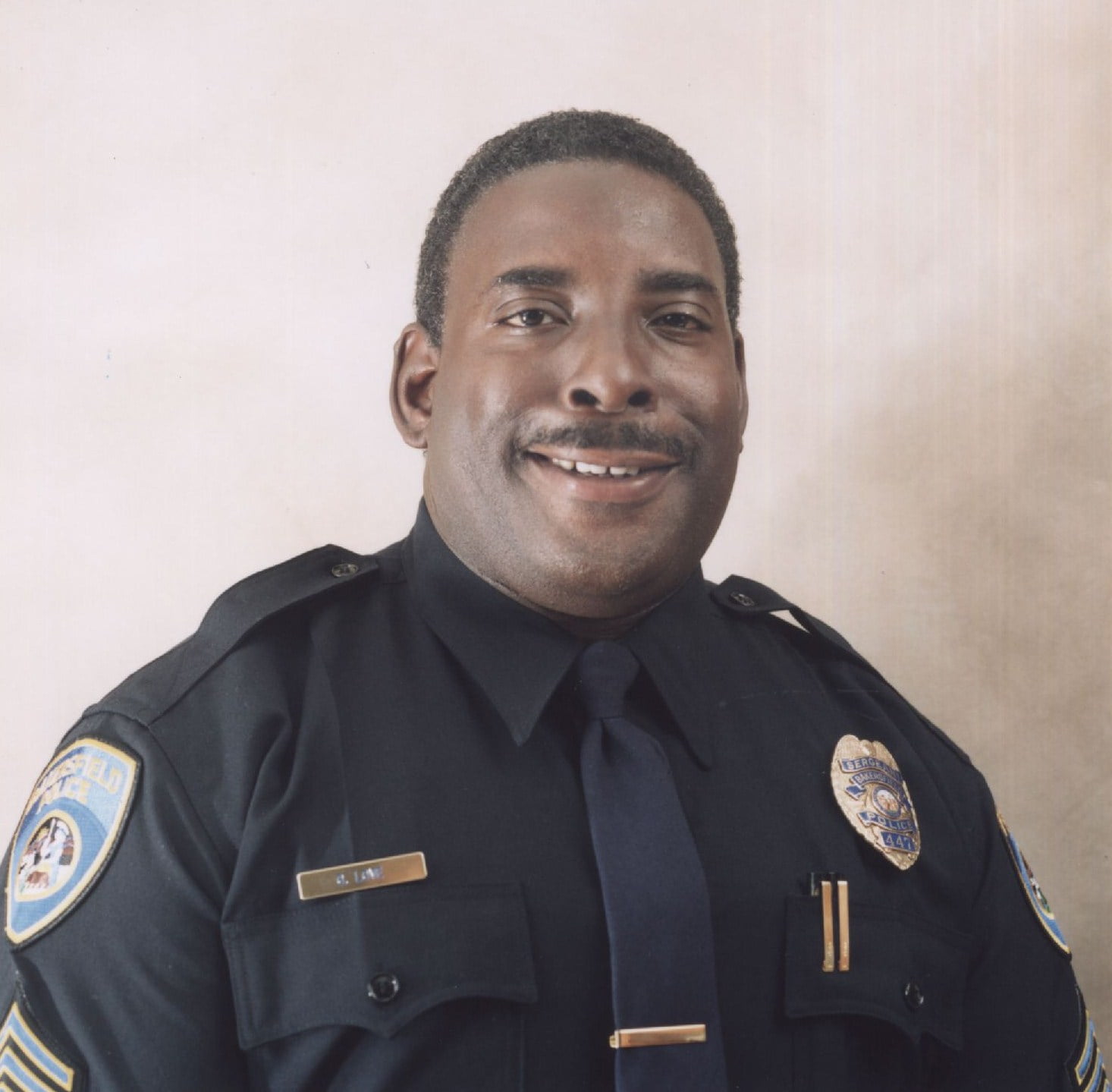 “That Friday morning, a little more than 24 hours before Orbin’s death, Anna got an odd feeling when she awoke to see him standing over her as she lay in bed.

“He gets this weird, goofy grin, almost like the Joker, and says, ‘I just wanted to say good morning,’ ” Anna recalled. “But it was just off. I told him he was acting strange, and that he didn’t need to go to work.”

Saturday morning, he sat at the end of the bed with a blank stare and twisted his hands together, unable to complete a sentence, and agreed to schedule an appointment with a psychiatrist. Out of concern that had year-old roots, Anna locked his gun in a lockbox. Later, when he dropped his daughter off at Jordan’s basketball game, he drove onto a sidewalk outside the gymnasium to do so. He told her he’d forgotten something at home — an inhaler for his asthma, she presumed — and would be right back.

Anna didn’t wait for him to come back.

Something was off — he was never one to miss even a minute of Jordan’s games — so she sped home. At first, she thought he was sleeping on the bed and didn’t realize he’d shot himself until she noticed bits of glass on the carpet, the blinds pushed through what had been a sliding glass door, and the gun she had locked up still in his hand. Anna would later learn her husband had a spare key to their lockbox on his keyring. He left no note behind.

After the game, Jordan and his sister, Alexis, knew something wasn’t quite right when their aunt picked them up and drove them to her house instead of theirs. In the driveway, she turned to them and braved the gut-wrenching task of being the first to tell them what had happened. She used straightforward terms, the only ones possible to break the news of a loved one’s death.

Jordan opened the car door and immediately fell on the front lawn, sobbing. His father, his friend, his coach, his mentor, his role model and his spiritual beacon, all torn from him in an instant.

“My darkest moment was definitely the day it happened, just hearing about it right there in the car,” Jordan said. “I didn’t want to believe it.”

Anna Love’s husband was an officer, detective, and sergeant for the Bakersfield Police Department for 27 years; before that, he was a youth pastor at Fellowship Baptist Church. He was a kind, hardworking man, but first and foremost a loving husband, devoted and caring father.

Anna Love was born Anna Lisa Bowden on November 12, 1968. She is the proud mother of Justin, Emily Danielle, Alexis, and Kami (Kamelia Renae Love born in 1988) who you probably saw during the draft, alongside her husband Nicholas Bushell. 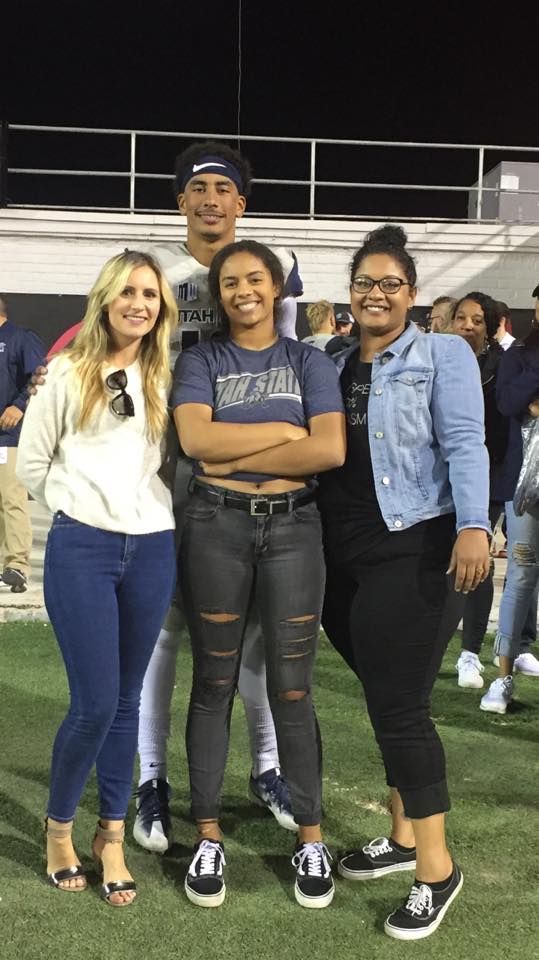 PinFrom left to right, Kami, Alexis, Emily, Jordan are in the back

Anna’s daughter  Alexis a 5’8″ freshman at San Diego State University is a member of the women’s rowing team and is pursuing a major in criminal justice, like her mom and dad, Alexis hopes to follow their path and become a police officer.

Emily (b. Jan. 11, 1992) graduated from Bakersfield College and is a registered dental hygienist at Smile Santa Maria Dental. Jordan’s momma Anna Love was a police officer with the Bakersfield Police Department for over 25 years.

Jordan Love’s Girlfriend is Ronika Stone, it is unclear when these two lovebirds started dating, but photos of them started to appear on each other’s Instagram in September 2020. This is what we can tell you about Jordan Love GF. 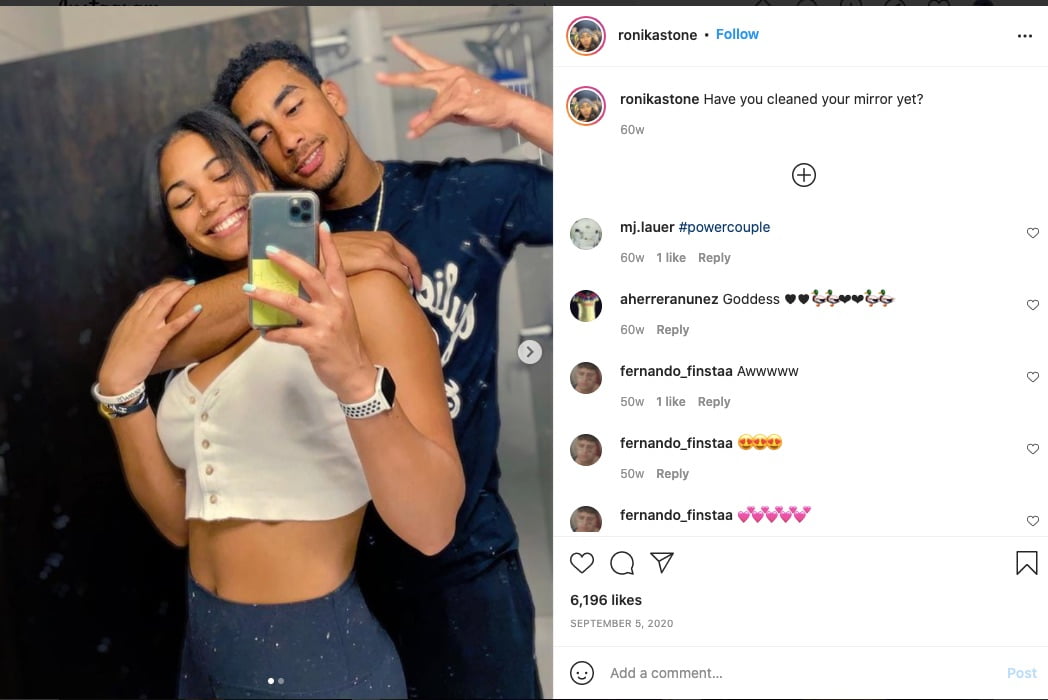 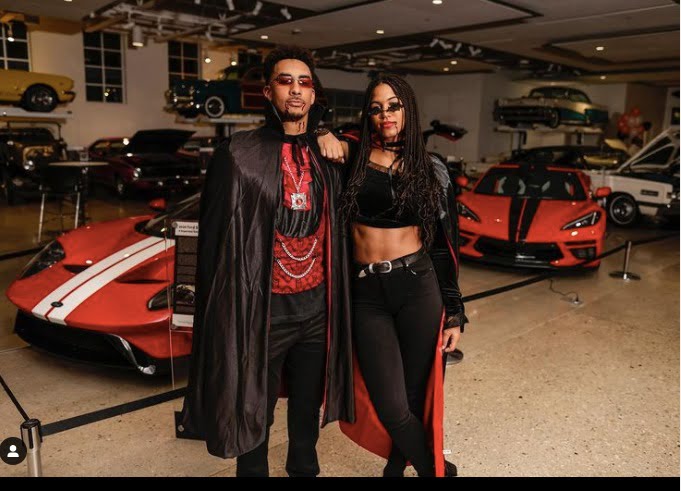 6’2 Ronika Stone was born in New Jersey, on July 6, 1998, she is one of the children born to Roxanne Stone and former NFL Pro Bowler Ron Stone.

Ronika’s dad Ron played college football at Boston College before he was drafted in the fourth round during the 1993 NFL draft by the Dallas Cowboys, the team where he won two Super Bowls in 1994 and 1996. 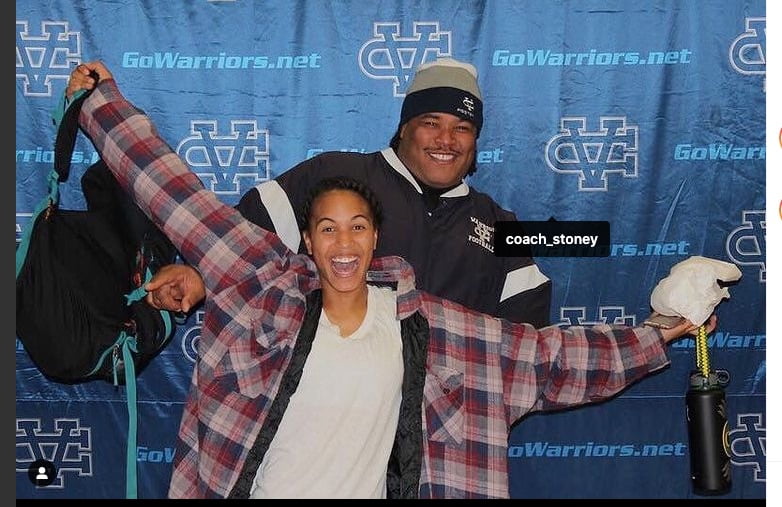 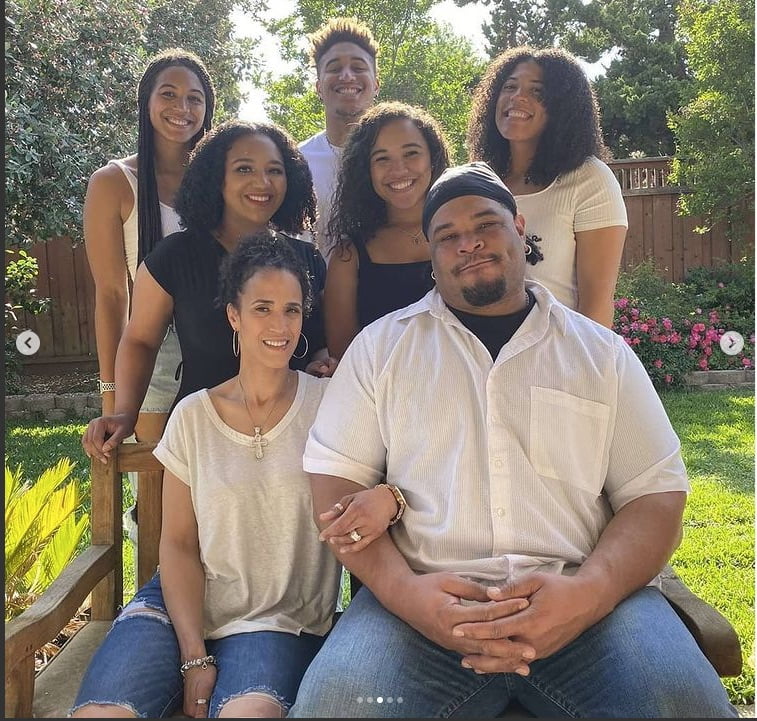 Ronika has three beautiful sisters and one handsome and talented brother. Her sisters are Ronna, DeJa, Ronnie Christina, and her little bro Ron Stone Jr. 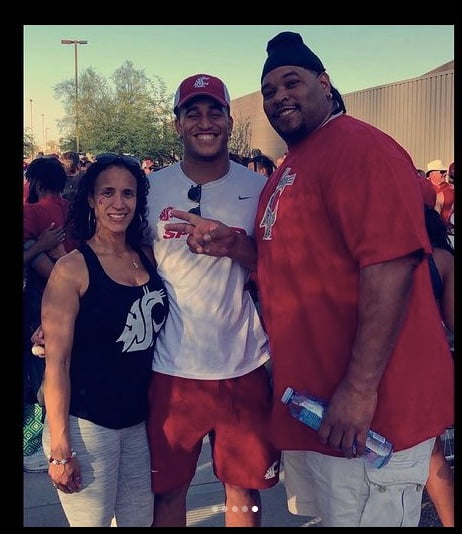 6’3 Ron Stone Jr. is a strong side defensive end playing at Washington State, he is working on a degree in communications 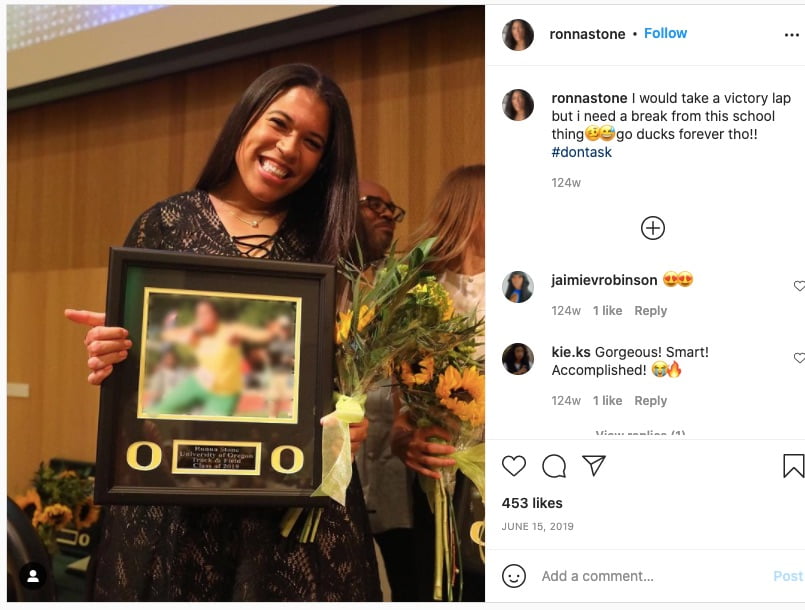 Her sister Ronna Stone threw the shot put and discus at the University of Oregon. DeJa Stone studied public relations and image management at San Jose State University, she is a Brewery Sales Representative for Barrel House Z.

Ronnie Christina who married her longtime boyfriend William Carlton in May 2021, holds a degree in psychology from Tyler Junior College snd a Bachelor’s degree in communications studies from Texas Christian University. 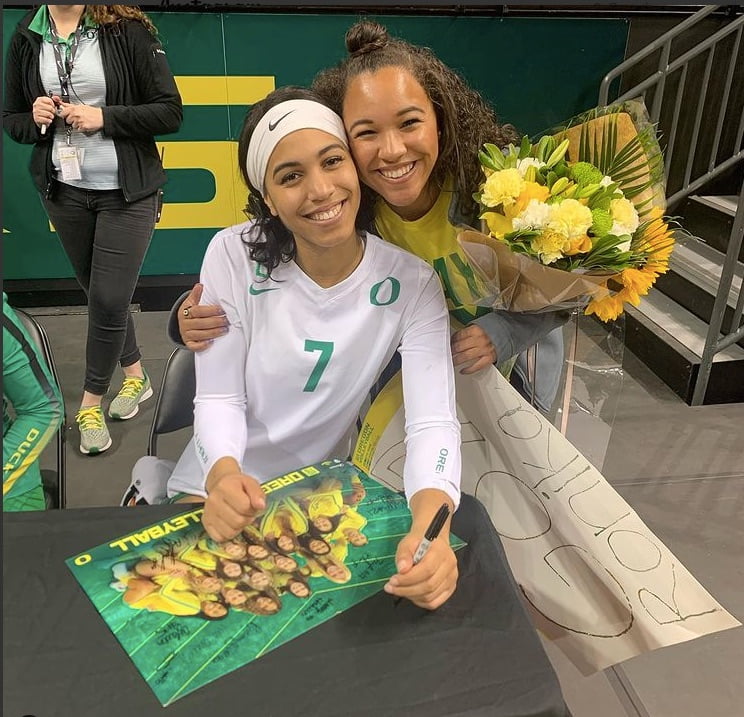 Ronnie Christina is an admission representative at Unitek College in San Jose, Cali. 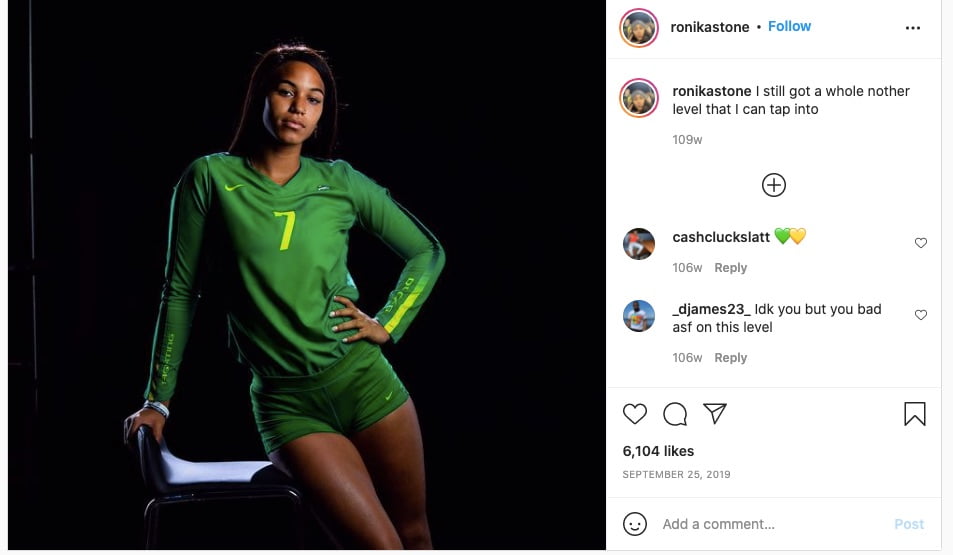 For her part, Ronika Stone, graduated from Valley Christian and the University of Oregon, where she was a star volleyball player. Ronika was a member of the  U.S. Women’s Junior National Team, selected  2017 Oregon Classic MVP, Three-Time All-Pac-12, 2019 AVCA Pacific North All-Region Honorable Mention. She graduated in 2020 with a B.A. in Journalism from Oregon. 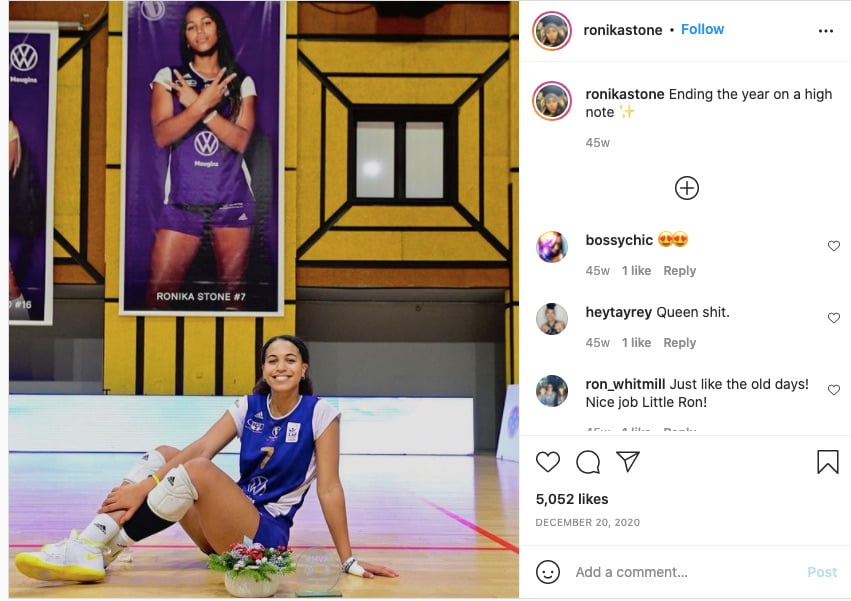 Ronika Stone played from the French team, Volero Le Cannet from September 2020 to April 2021; she is a social media contributor for the Winning Edge Leadership Academy.