Kenan Smith is the lucky guy dating Olympic Skier Lindsey Vonn. He is no celebrity, but he is no ordinary guy either; like her famous gal KS is into sports, he is the assistant receivers coach for the Los Angeles Rams and I bet from now on he will be the guy every guy wants to be.

Lindsey Vonn’s is giving love another chance. After divorcing ex-hubby Thomas Vonn in 2013, she dated pro golfer Tiger Woods. After their split in May 2015, it was rumored she and  Formula One racer Lewis Hamilton were dating.

Lindsey confirmed her relationship with Kenan on Instagram by posting the photo below. 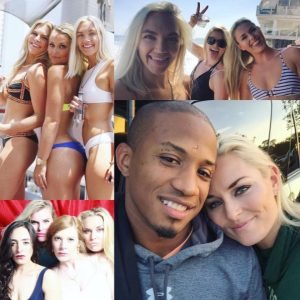 Tomorrow is thanksgiving so before my family gets here I want to take the time and give thanks. Even though I’m injured, again🙄.  I have so much to be thankful for.

Incredible friends, an amazing boyfriend, my family and a lot of loyal supporters. With my Uncle’s passing it reminds me even more to appreciate what we have in life because you never know what the future holds. I hope everyone has a wonderful turkey day! With love❤️, lindsey 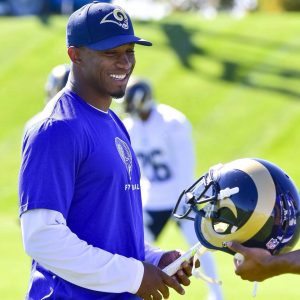 Kenan Rashad Smith, 35, from San Jose, California was born on September 18, 1981. He attended at Oak Grove high school in San Jose. Then in 2005, graduated from Sacramento State with a degree in Business Administration.

While at Sacramento State he was a wide receiver and team captain of the Sacramento Bulldogs football team. Around 2004 and 2005 he was a marketing intern in the athletic department at the University of Michigan.

Subsequently in 2006 served as Assistant Director of Marketing & Promotions at Michigan. In 2010, Kenan was a graduate assistant coach in charge of wide receivers at Anderson University where he also pursued his master’s degree in Business administration; around that same time he was a football operations intern at Ball State University

Ultimately from 2011 to 2013, 5’11 Smith served as an assistant coach at Butler University prior to landing a job with the NFL in 2014, when he was named offensive assistant for the St. Louis Rams.