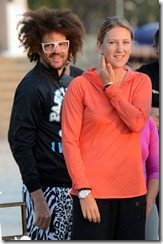 Victoria Azarenka is the best female tennis player in the globe, and she is dating DJ/singer Redfoo. The pair have been dating since September 2012, which is when Redfoo aka Stefan Kendal Gordy was spotted encouraging her on at the US Open. From the time then, he has traveled to see her play in other tournaments, including the Australian Open.

Redfoo was seen watching Azarenka take on Sloane Stephens in the semifinals of the Aussie Open Thursday.

The two have been also seen sun tanning and bathing in the beach and playing sports together. They have also seen in night clubs in Las Vegas together, and he escorted her to a tennis exhibition in Thailand.

Redfoo, confessed he was in love during a recent radio interview, while he wouldn’t name the woman.

I’m just sayin’ it’s a special lady, and my whole world is different

I want to talk about it so much.

Redfoo plans to use his GF name as a mock-up in an upcoming song. It seems like they have been great inspiration on each others’ lives.

Whilst the 37-year-old rapper real name is Stefan Gordy is better known for his giant glasses, huge red afro and ackward catchy club hits like “ and I Know It,” “Sorry for Party Rocking” and “Party Rock Anthem” produced with his collaborator  in (and nephew) Sky Blu, it seems that always dreamed of playing tennis pro. His dad Berry Gordy — founder of Motown records — was a “fan” about the sport and had a tennis court at his Bel-Air house.