Macarena Rodriguez; she is the lovely girlfriend of  Lucas Vazquez. Lucas is the Spanish soccer player who currently is a right winger for Real Madrid.

He started his senior career with Real Madrid C and B; he also played in his youth with Curtis and Ural before joining Real in 2007. It was until 2010, that he joined the senior squad, appearing in 106 matches and recording  17 goals.

Real Madrid loaned him to La Liga’s RDC Espanyol on August 19, 2014, and signed a four-year permanent deal with Espanyol on June 3rd, 2012, although Real Madrid held a buy-back clause which became official on June 30, 2015, when Lucas Vasquez returned to Madrid.

As noted Lucas’ girlfriend is the lovely Macarena Rodriguez, who will become his wife this summer.

Macarena Rodriguez,  the girlfriend of Vazquez for the last five years was born on June 5, 1989, in Spain. Her sister Montse is also a soccer wag, her boyfriend if Spanish goalkeeper Andres Prieto.

Macarena holds a bachelor’s degree in sports and physical education. 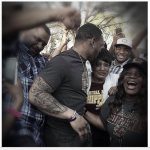