Meet the stunning Daria Medvedeva; she is the lovely wife of  Daniil Medvedev. Her husband is a Russian tennis player who has been playing professionally since 2014 and reached his highest singles world ranking of #4 on February 8, 2021.

Daniil Sergeyevich Medvedev was born on February 11, 1996, in Moscow, Russia; he is one of three children born to Olga Medvedeva and Sergey Medvedev, a housemaker and a director of a construction company, respectively. His sisters are Elena and Julia. Daniil’s dad moved his family to Antibes, Frances. 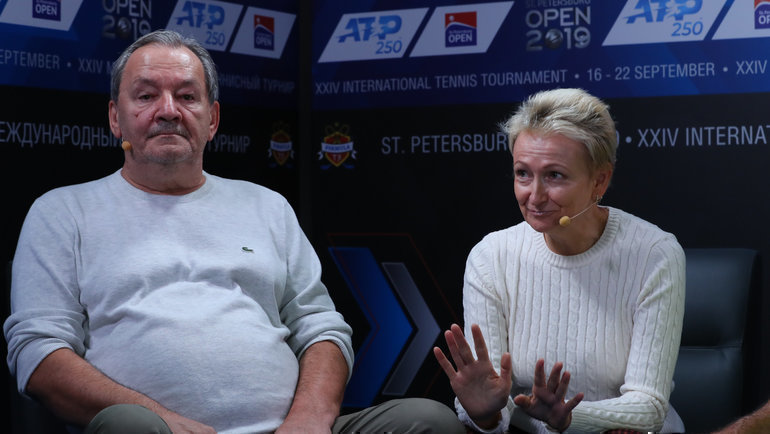 Daniil started playing tennis at a very young age, he showed potential which is why Sergey Medvedev encouraged Daniil to take tennis seriously when he was just six years old, there hasn’t been any turning back since then.

Both of Danii’s pretty sisters are already married, Elena now Elena Pouliquen married her boyfriend Thomas Pouliquen in October 2015, they have two beautiful children and live in Nice, France; Elena’s husband Thomas originally from San Francisco, CA is the co-founder of e-Doping, founder of BadMarketing.fr; he studied at the City College of San Francisco (associate’s degree in international business), Pigier (bachelor’s degree in marketing & communications), and Ipag Business Schooll (masters in digital communications).

Daniil’s other sister Julia Medvedva a mother now Julia Turchaninova and her husband Bulat Turchaninov have three children of their own; Julia worked at the front desk at Barvikha Hotel & Spa.

Daniil Medvedev a defensive baseliner player weighs 183 lbs. or 83 kg; his height is 6’6 or 1.98 m. Hre is considered to be a mentally strong competitor, plays a right-handed and two-handed backhand.

His best shot is his backhand, which he hits with depth, pace and precision and is able to redirect down the line for winners.

Medvedev is a 6’6 tall baseline player – he possesses exceptional movement, enabling him to excel at the back of the court. His game is centred on remaining un-attackable in long baseline rallies due to his long, flat, low bouncing and penetrating groundstrokes. His continued deep wear down opponents.

Daniil Medvedev’s net worth has been estimated at $3 million, has prize money of $14,707,309; in 2019, Medvedev got himself sponsorships from the holding group Tinkoff, Swiss watches brand Bovet, Lacoste and on September 19, 2019, got a splendid deal with BMW.

BMW M is BMW’s fastest, most powerful, and most innovative sports car. And Daniil Medvedev is the brightest and most titled Russian tennis player right now.” The director-general of BMW Russia, Stefan Teuchert, said in a statement.

“On the tennis court, Medvedev demonstrates qualities typical of BMW sports cars – speed, power, intelligence and a strong character. We are glad that we managed to agree on cooperation, and we look forward to future joint projects.” 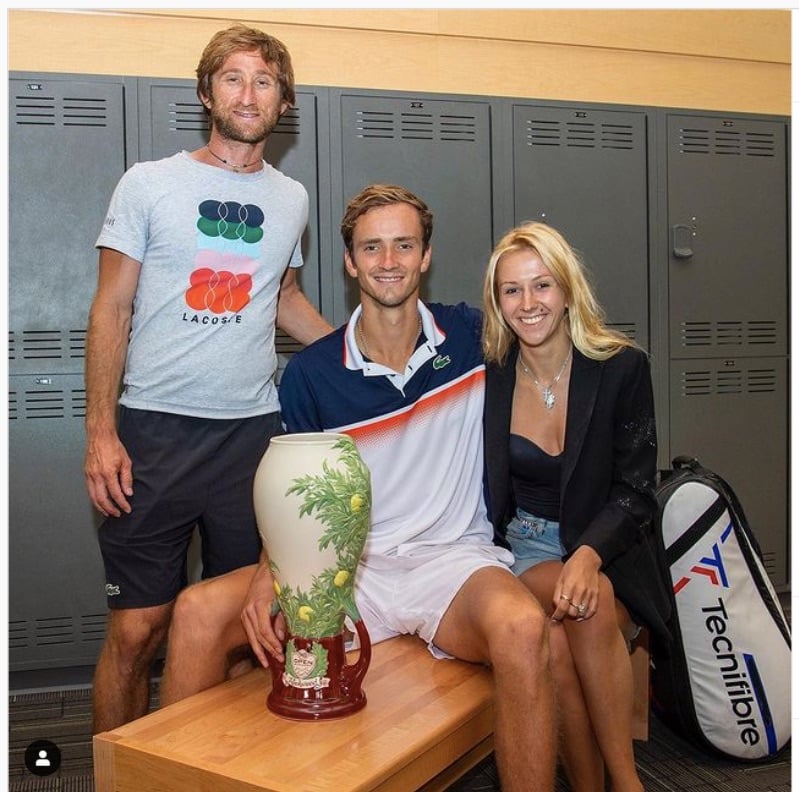 Daniil Medvedev’s beautiful wife Daria is without a doubt the most important member of his team, she is the force that moves him, keep him grounded, and gets him back on his feet when life brings him down

“She gave me a lot of confidence. I always say that it’s the moment I made the proposal to her, that’s when I started to go up [in the rankings]. It was at this moment — it was after Wimbledon. I was in 65th place in the ranking, and then in ten months I won two major tournaments and entered in the top 10. We have greatly restructured our life, we work for each other, I earn, but Daria, – Daniil smiles shyly, – helps me to earn more.

I mean, I made the best American swing I could have made last year, and it was only going up, and she does a lot for me in order for me to play better tennis. I’m talking about small things in life that would take my attention, she cares about them, and I just have to play tennis and win some matches.

Coached by Gilles Guevara, Daniil said his pretty wife Daria is helping him to play much better, which is why he wasn’t jealous when she stole the spotlight during his final match in Cincinnati against David Goffin. 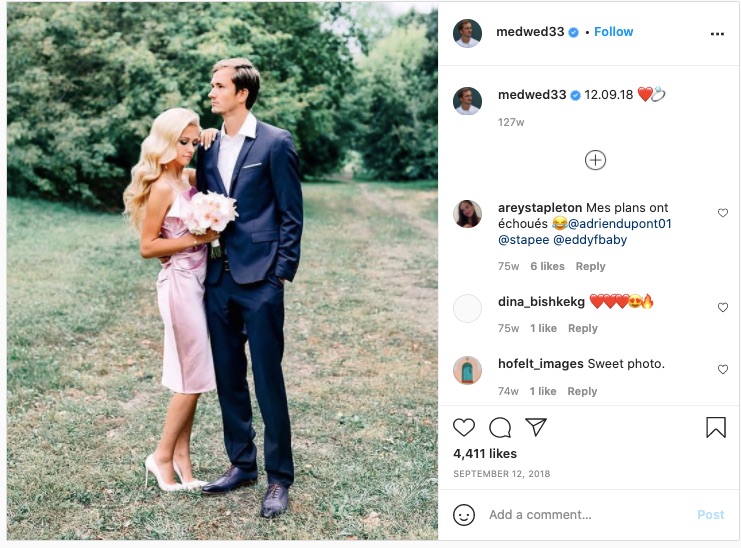 Daniil and Daria dated for several years before they tied the knot on September 12, 2018, at the Kutuzov registry office in Moscow, Russia. 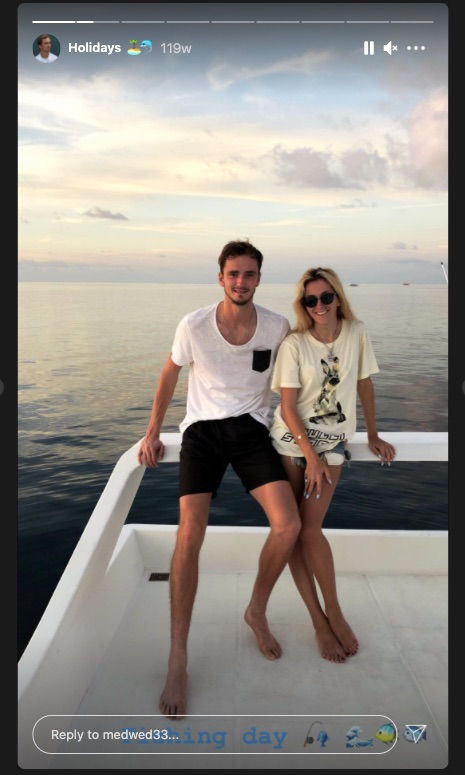 Daria a former junior tennis player met Daniil when they were children; she holds art and history degrees and takes care of getting international visas, travel planning, interviews, sponsors, and talks with agents.

She was playing tennis until she was 17 or 18 and then had a lot of injuries and couldn’t reach the level she wanted to be.

It’s really good because she understands tennis, which is needed. She knows we can’t go shopping before a match for example. She knows that there are many days during the tournaments when I’m busy from eight in the morning until the evening and maybe it’s not easy to understand this if you don’t know the game.

She has helped me to grow up as a man and as a tennis player. I felt that while I was able to compete mentally and technically, physically I was not even close. 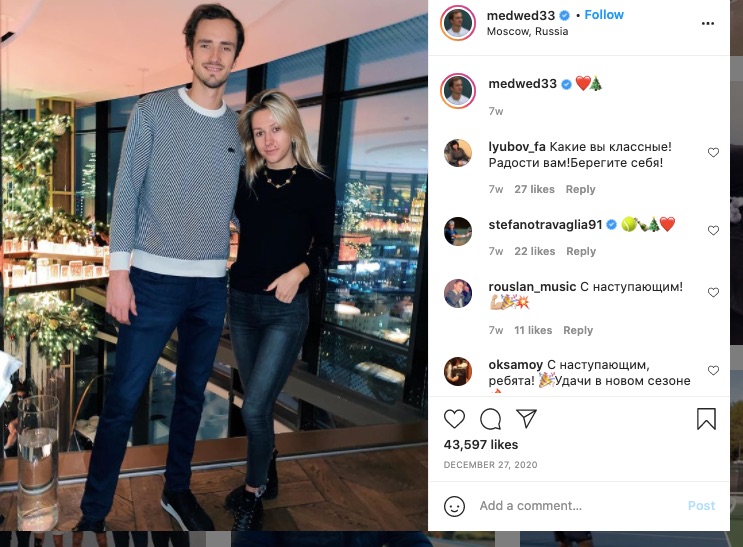