Susie Spanos is the “First Lady of San Diego Football,” she is the lovely wife of Dean Spanos, Chairman of the Board and President of the San Diego Chargers.

Susie’s husband was born Dean Alexander Spanos on May 26, 1950. Originally from Stockton, Dean is the son of

His father started a catering company in 1951 with an $800 loan. He used the profits to buy real estate, eventually building A.G. Spanos Companies into one of the country’s largest apartment developers.

Dean played football and golf at Lincoln High School in California. He went on to play golf at the University of the Pacific in Stockton.

Dean is an avid golfer and has won various golf awards throughout the United States. In addition to overseeing all business and football operations for the Chargers, Dean and his brother, Michael, oversee all construction operations nationwide for the A.G. Spanos Companies.

He became the team president and CEO of the NFL’s San Diego Chargers in 1984 and won the Harold Leventhal Community Service Award in 2011.

The 66-year-old recently announced he is moving the franchise to Los Angeles.

Originally from Los Angeles, Susie has been married to Dean for nearly 40-years.

Susie Spanos, a proud mother and grandmother, wife and breast cancer survivor –has been a quite the role model in the community. She works with and serves on the boards of many charitable organizations in San Diego, including the San Diego Women’s Foundation.She is on the board of the Salvation Army and an advisory member of Las Patronas.

Susie has been a driving force in supporting the San Diego Blood Bank and its umbilical cord blood program, helping the Chargers’ annual blood drive become one of the most successful in the nation.

Susie Spanos received the prestigious Celebration of Life Award in 2011 from the American Cancer Society. In 2004, when a routine mammogram revealed a spot smaller than a pinhead, she insisted on a biopsy. She had stage one breast cancer, which doctors treated successfully.

She is a spokeswoman for the NFL’s cancer campaign. She also was honored as a “Woman of Dedication” by the Salvation Army in 2001 and has been named the Woman of the Year by the San Diego Leukemia Society for her philanthropic work in the community.

For sure she has been an active NFL spouse. In 2012 following the passing of former Chargers linebacker Junior Seau, she and her husband hosted a “Celebration of Life” for Seau in Qualcomm Stadium. 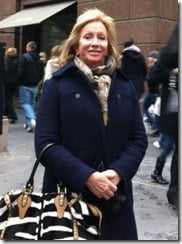 Susie Spanos and her husband have received many honors for their generosity. Most recently, the Spanos family and the Chargers received the Light of Hope Award from the Epilepsy Foundation of San Diego.

In 2014, the Spanos family received the Outstanding Community Service Award among all family-owned businesses by the San Diego Business Journal.

The American Diabetes Association honored Spanos at its annual Fathers of the Year Dinner in 2010. In 2007, the local Salvation Army named Dean and Susie Spanos as their Most Valuable Philanthropists.

She is the mother of two sons, A.G. and John. Both of her sons work in the Chargers organization.

Their son A.G. is married to Kamri Spanos, together they have two small children. A.G. Spanos was named president—business operations for the Chargers in May 2015.

John –who was named president football operations for the Chargers in May 2015 –is married to Jodie Spanos.

Susie and her husband currently reside in La Jolla, California.