Colleen O’Brien is the lovely wife of NFL coach, William James O’Brien. Her husband better known as Bill O’Brien is the current head coach of the Houston Texans.

His big break as the head coach came in 2012 when he was named in the position for Penn State’s Nittany Lions. He named Houston Texans head coach in 2014.

Colleen’s hubby was born in Dorchester, Mass. O’Brien grew up in Andover, a Boston suburb. He played linebacker and defensive end at Brown. He belongs to the class of 1992 and holds a double concentration in political science and organizational behavior management. 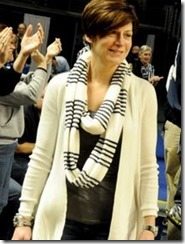 Colleen O’Brien is also the mother of the couple’s two children. She gave birth sons, 15-year-old Jack and 12-year-old Michael. Their eldest, Jack, was born with a brain malformation known as lissencephaly –which makes him have seizures. According to a 2012 NY Times article, the O’Briens can do little except to turn their son on his side and wait for the seizure to end, every morning.

Colleen O’Brien was told about Jack’s disorder when he was only 1-year-old. At the time, Bill O’Brien was an assistant at Maryland and recruiting in New Jersey when he got the emotional call from his wife.

Colleen O’Brien is a graduate of Georgia State’s law school. Colleen has been the perfect match for her hubby’s coaching life and the challenges the couple has faced as a family.

The mom of two beams when talking about Jack’s smile, his love of fire trucks and his calm demeanor.