Meet pretty Ikea Perrier; the longtime girlfriend of NFL player Tre’Davious White. Her beau is the impressive 5’11” cornerback for the Buffalo Bills.

The Bills selected him in the first round (27th overall) in the 2017 NFL Draft. Prior to that, he played college football with the LSU Tigers.

White made his NFL debut with the Bills against the New York Jets during the regular season.

Pretty Ikea, was born Ikea Latrell Perrier November 26, 1993, in New Orleans, Louisiana. She is one of the children born to Catrell Noel and Felipe Perrier; also proud parents of their other children, Felipe, LaToya and Phillip. 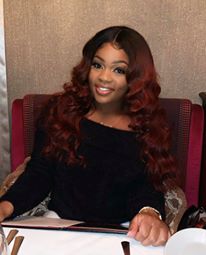 Ikea met Tre’Davious while they were in college, Tre’Davious at LSU and she at Southern University and A&M College in Baton Rouge from where she graduated with a Bachelor of Science in  Nursing and a minor in psychology in December 2017.

This pretty couple has two beautiful boys together; Tre’Davious Jr. born on April 30, 2017, and Tristen born in September 2019.