Tobias Harris is currently off the market so it seems, after the NBA player shared a steamy photo to his social media of him and his alleged lady.

Harris had been keeping a relationship under wraps however, it seems the 27-year-old is ready to make things official with a mystery brunette.

Born July 15, 1992; the Islip, NY native was raised with four siblings: Tyler, Tesia, Torrel, and Terry. His mother’s name is Lisa.
Harris was named Mr. New York Basketball during his senior year at Long Island Lutheran High School.
He was then drafted 19th overall by the Charlotte Bobcats in 2011 after one season at the University of Tennessee.
The NBA forward began his career with the Milwaukee Bucks, then spent three years with the Orlando Magic before a 2016 trade sent him to the Detroit Pistons. He was traded from the Pistons to the Los Angeles Clippers in 2018. In 2019, he was traded to the Philadelphia 76ers. 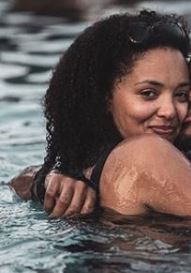 Harris is not the typical flashy professional athlete, he’s more the private type so when he uploads a photo holding a stunning lady in his arms, it must be serious. The lady in question has yet to be identified, but we can say they make a handsome couple.
Last year during an interview he mentioned his girlfriend when he opened up about talking to a therapist; he said,
“My girlfriend is the first person who told me to go talk to somebody and see how it goes, and my response back was like, ‘I don’t need to go talk to anybody,’” “But until you actually try it and do it, then the stigma around it goes away … and you go, ‘Actually, that was really helpful for me.’ I think I appreciate how open of a field it is now, and I think it’s important for a lot of people.”

Harris is also passionate about yoga, mental health and well being. Though is not clear who his leading lady is, she is certainly good for him.
Check out Tobias Harris and his girlfriend on Instagram here.