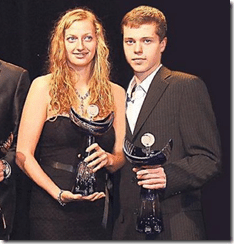 Czech tennis player Adam Pavalsek has been playing tennis since he was a toddler! He was born October 8, 1994 but has been on the court since he was just five! He was born in Bilovec, Czech Republic and currently lives in Great Albrechtice. 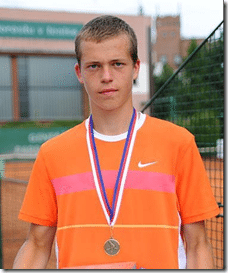 Let’s get to know the 18-year-old talented player. His coach is Davis Cup Captain Jaroslav Navratil; Adam plays Right Handed (Double Handed Backhand) and rather a clay surface as he was taught as a young boy. Like any other young man still in his teen he has different interest and hobbies, some of them include football and computers. But at age 16 he also became interested in something or someone else I should say. That is professional tennis player Petra Kvitova. Is not hard to imagine how the love birds met I mean they have the same nationality and both share some serious skill for the sport! They began dating two years ago when Adam was only 16 and Petra 21.

The couple made the headlines not only for the five year age difference but also because Petra became the winner of Wimbledon back in 2011. She was photographed with her younger boyfriend and partner all over. 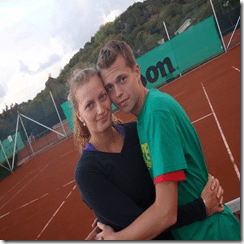 As for Adam we can highlight his achievements as follows:

Through out his career he has taken part on a wide number of and activities making a name for himself and not only as the younger boyfriend of the 2011 champion and former number two in the world.

There’s been rumors about the couple splitting up earlier this year since Petra partnered with Radek Stepanek in the 2012 Olympics in the mixed doubles, apparently that went a bit further, the rumor is Radek is divorcing from Nicole Vaidisova as he is dating Petra Kvitova. If that were so, could we have a cheating Petra?? Maybe our young friend just doesn”t do cheating.

You think Adam’s flame will pull a win one more time this year???