This Ronald Schmidt; he is the coach and also the boyfriend of Anastasija Sevastova, the Latvian/ Russian tennis player, current #165 in the WTA World rankings. Ready to meet her man?

Ronald’s lady Anastasija Sevastova was born April 13, 1990, in Liepāja, Soviet Union. She won her first WTA match at the 2007 Istanbul Cup; sadly she was out in the first round of the 2009 French Open and again at that year’s Wimbledon Championship.

She defeated World No. 9 Jelena Janković in the first round of the 2010 Monterrey Open, but got eliminated in three straight sets by Anastasia Pavlyuchenkova.

Anastasija was eliminated in the fourth round of the 2011 Australian Open by Caroline Wozniacki. A series of injuries and health problems send her out of the court from 2013. It took her two years to get better and feel better with her play; it was only then that she made her comeback to tennis.

She received a wildcard into the $10K tournament in Sharm-El-Sheikh, Egypt in January 2015 and reached her 1st WTA Semi Final at the Brasil Tennis Cup.

Stunned the world when she defeated Roland Garros Champion Garbiñe Muguruza in the second round of the 2016 US Open in New York. 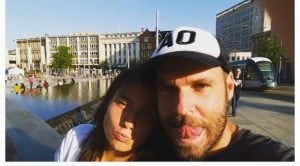 Being away from playing wasn’t easy, a comeback is no piece of cake either, but having Ronald Schmidt as her boyfriend and coach with her every step of the way, makes it a lot better.

“Before I didn’t talk that much about my feelings and stuff,” she said. “I’m not that open. Except when I know I can trust the person, it helps me a lot to talk, to open up a little bit more.”

Sevastova said, however, that the intertwined professional-personal relationship could create complications.

“There are good and bad days, but more good,” she said. It’s complicated, but you have to see private away from tennis, and work that out. I think we are working that out pretty well.”