Meet Cristina Barnea Chapman aka Cristina Tina Barnea is the beautiful wife of Cuban MLB pitcher, Aroldis Chapman.  Chapman known as the Cuban missile is one of the talented players for the New York Yankees.

Surely, you know plenty about his impressive career, so let’s see what is there about his pretty lady!

According to the media, Cristina told authorities that Chapman, physically abused her in front of family, forcing her to run from him and hide in the bushes of a neighbor while she called 911.

The couple dispute started after Tina confronted him about messages from another woman. According to the SunSentinel, Christina Barnea also filed a paternity suit in November.

Chapman made his debut with the Cincinnati Reds in 2010. He signed a six-year, $30.25 million contracts to play for Cincinnati. The Yankees acquired Chapman from the Reds for a package of four minor leaguers in December. He is expected to be the Yankees closer this year.

In 2015, he worked to a 1.63 ERA with 15.7 K/9, 4.5 BB/9 and a 37.1 percent ground-ball rate. Over the past four seasons in Cincinnati, the Cuban-born phenom has delivered an exceptional 1.90 ERA while averaging 16.1 strikeouts and 3.8 walks per nine innings to go along with an average of 36 saves per season. Chapman is known for his blistering fastball; the left-hander averaged 100.3 mph on his heater in 2014 and followed that up with a similarly incredulous 99.5 mph average this past season. According to

Chapman is known for his blistering fastball; the left-hander averaged 100.3 mph on his heater in 2014 and followed that up with a similarly incredulous 99.5 mph average this past season. According to

According to MLBtraderumors, Chapman, 27, is arguably baseball’s best relief pitcher but is currently being investigated by the league, and there’s a very real chance that he’ll serve some form of suspension from commissioner Rob Manfred under the league’s newly implemented domestic violence policy. 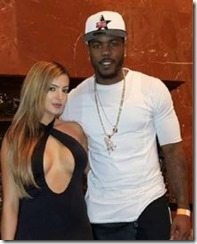 Cristina Tina Barnea aka Ms. Beautiful on Instagram is the proud mother of the couple’s adorable daughter Angelina. We assumed, she is very busy these days being a mom to that gorgeous little girl and showing her support to her MLB stud, probably left her modeling days behind her, which is kind of a bummer, she is lovely!

As you can see from her Instagram, she is no longer Cristina Barea, but Mrs. Angelina Cristina Chapman, in that case, the lovely couple is now happily married and enjoying as much as they can of Aroldis’ free time to be together.

Aroldis who defected from his home country in 2009 to pursue his MLB playing dreams, left behind his pregnant girlfriend, Raidelmis. The couple has one child together, daughter Ashanti Brianna. You can read more about his first baby mama below.

In addition to daughter Angelina and Ashanti, Chapman is also the father of Atticus Gabriel Chapman.