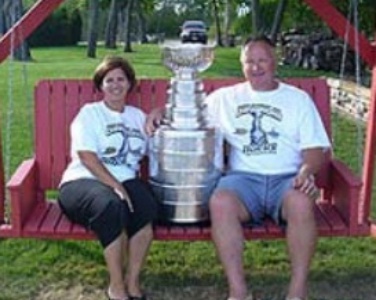 Meet Corey Stack Carlyle aka Corey Carlyle; she is the wife of NHL coach Randy Carlyle. Coach Carlyle is the head coach of the Anaheim Ducks. But surely you already knew that just like probably know all about his early years as an NHL player with the Toronto Maple Leafs, Pittsburgh Penguins, and ultimately the Winnipeg Jets. Subsequently after retiring from the NHL first became the assistant coach for his former team the Winnipeg Jets, second joined the Manitoba Moose, then the Washington Capitals and finally became head coach for the Anaheim Ducks in 2005.

However, there was that short stint with the Toronto Maple Leafs in 2012, before returning to Anaheim on June 16, 2016. But first and foremost we are here to tell you about his loving wife.

Mrs. Corey Carlyle is one of three children born to Donald Stack and Teresa Stack (nee. Cuomo); her siblings are Gordon, Donnie, and John who sadly passed away of ALS, aged 58, in January 2015.

59-year-old Corey F. Carlyle was born and raised in Sudbury, Ontario in Canada where many members of the family still live. On the day Corey met Coach Carlyle, she was watching one of her dad’s horse race on track. The Carlyles have three children together; sons Derek and Craig, and daughter Alexis who has inherited her grandfather’s love for horses.

Derek lives in San Marcos, California with his wife Lindsey; Craig also lives in California, he used to be the head coach of the junior ice hockey team, the San Diego Sabers