Shannon Noel Ford is the model girlfriend of NFL player, Kyle Long -currently a player with the Chicago Bears.

Shannon’s beau previously played college football for Florida State University, Saddleback College, and the University of Oregon. The offensive lineman was drafted by the Bears in the first round of the 2013 NFL Draft.

Long who comes from a family of star football players, made the Pro Bowl, as well as NFL.com’s All-Rookie Team in his rookie year. His father is Hall of Fame football player and analyst Howie Long. His older brother Chris Long was the 2nd overall pick in the 2008 NFL Draft by the St. Louis Rams.

30-year-old Kyle was first linked to Shannon back in 2017. The redheaded model participated in the 2012 Miss South Carolina Teen USA and reached the top 16 in the national pageant. 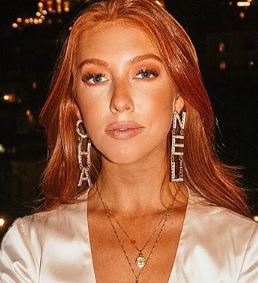 Originally from Gilbert, South Carolina but living in Nashville, Tennessee -she studied Political Science & Broadcast Journalism at University of South Carolina Upstate.
You may recognize Shannon Noel Ford from her stint on reality TV. Shannon who was seen on drama-filled first season of Very Cavallari, was let go in season two. Ford was let go from the company after she failed to see eye-to-eye with Cavallari, the company’s founder.
According to Page Six, Ford was axed for her dramatics and lack of work ethic. Cavallari also found that, although Ford was good on paper, she lacked the real-life experience to drive a brand forward. Ford’s firing was featured on the premiere episode of Very Cavallari Season 2.
Since being fired earlier this year, Ford has been using her social media wiles to promote her own brand and products.
The model and social media guru released a Pop Socket line that sold out quickly, and now she’s moved onto crafting hats with her most famous and witty sayings.

Shannon and Kyle apparently didn’t work out, is not clear why or when the couple called it quits. From her social media she appears to be in a new relationship with musician, John Gurney.