Meet Emily Wilkinson Mayfield; she is the beautiful wife of NFL player Baker Mayfield, the quarterback for the Carolina Panthers, who previously played for the Cleveland Browns and college football at Texas Tech and the University of Oklahoma. Years ago we talk to you about Baker Mayfield’s college sweetheart Morgan Mayberry.

As of August 2022, Baker Mayfield’s net worth has been estimated at $12 million. In addition to his NFL salary, Mayfield earns around $10 million from his endorsement deakls with Amazon, Hulu, Nissan, BodyArmor, Panini America, Allen Edmonds, Nike, Progressive, Riddell Sports.

On April 23rd, 2021,  the Cleveland Browns exercised an $18.858 million option for 2022. According to Sports Illustrated, the Cleveland Browns agreed to pay $9.5 million of Mayfield’s 2022 salary, while the Carolina Panthers will pay $5 million, and Baker Mayfield agreed to shave off $3.5 million to help out Carolina; he can hopwever get that cash back thanks thru incentives. Baker Mayfield’s annual salary is 8.7 million

On August 22, 2022,  Baker Mayfield was named the Carolina Panthers’ starting quarterback for Week 1 against his former team, the Cleveland Browns.

Things moved fast for Baker and Emily, after months of dating they got engaged and less than a year later they exchanged their vows.

A year ago today, you asked me to spend forever with you, and next weekend we officially say “I do.” I am truly the luckiest girl in the world.

Emily and Baker Mayfield got married on July 6, 2019, at Calamigos Ranch in Malibu, California As noted, Emily and Baker started dating early in 2018; after just a couple of months of dating, they announced they were engaged.  Baker posted a series of photos of that special moment on Instagram on June 30, 2018. Furthermore, Emily an Instagram model worked as a patient coordinator at the Beverly Hills-based plastic surgery clinic Galanis Plastic Surgery; but decided to quit her job and followed Baker in Cleveland. Prior to Galanis, Emily worked as an event coordinator in her natal Omaha. 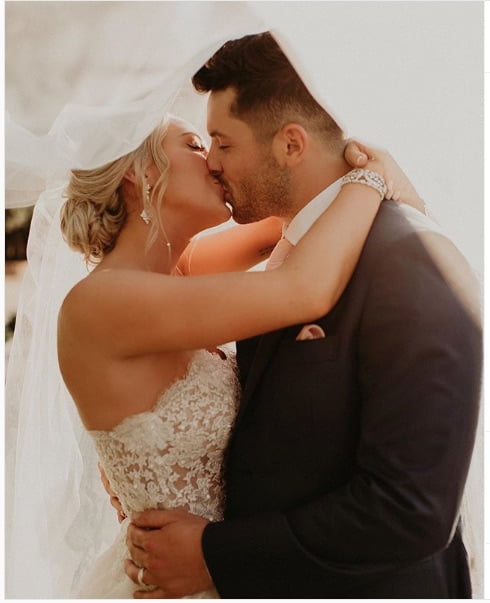 Furthermore, the lovely couple tied the knot on July 6, 2019. You probably have seen Emily Mayfield joining her famous quarterback for a series of television commercials for Progressive.

Baker Mayfield Instagram account is quite entertaining, he posts regularly to his 1.6 followers; and if you are also interested in checking out Mayfield’s pretty wife Emily Mayfield’s Instagram, check her out, Emily has 227K followers and she shares a lot there.