This stunning brunette is Nikole Adena Prelooker; she is the beautiful girlfriend of college football player Max Gilliam, the 6’3″ quarterback currently playing for the Rebels at the University of Las Vegas.

Max Gilliam is one of two children born in Ventura, California to Mr. Jeff Gilliam and his beautiful wife Heather. Max has a younger sister named, Brooke.

He started his college carer at Cal before verbally committing to play with the Rebels at the University of Las Vegas on December 10, 2017.  He red-shirted at Cal in 2016, but played in 10 games his junior year in UNLV, finished the season with 1, 185 passing yards, 148 passes, 10 touchdowns and 7 interceptions.

Max replaced Rebels quarterback Armani Rogers after he suffered an injury, in 2018 completed  1,394 passing yards, 8 interceptions and 14 touchdowns. He didn’t played in 2019.

Max graduated in May 2020, with a bachelor’s degree in economics.

Max Gilliam’s Appeareance on Below Deck

As for now it looks like Max Gilliam is still dating his longtime GF Nikole Prelooker, but his sushi incident could affect his relationship.

As you all know he appeared on the reality television show Below Deck. He releasedan apology for what he did there and I bet he already had apologyze to Nikole. 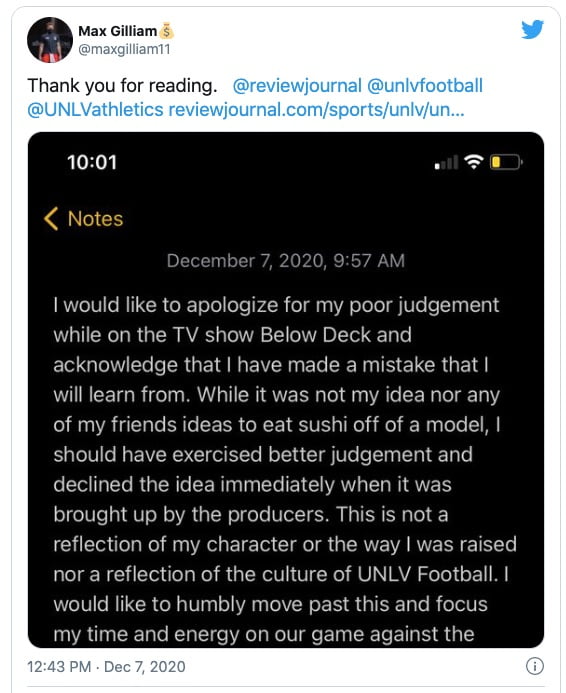 “I would like to apologize for my poor judgement while on the TV show Below Deck and acknowledge that I have made a mistake that I will learn from,” Gilliam wrote on Twitter.

“While it was not my idea nor any of my friends [sic] ideas to eat sushi off a model, I should have exercised better judgement and declined the idea immediately when it was brought up by the producers.”

“This is not a reflection of my character or the way I was raised nor a reflection of the culture of UNLV Football,” Gilliam wrote. “I would like to humbly move past this and focus my time and energy on our game against the University of Hawaii this weekend.”

His Rebels coach Marcus Arroyo, who said he was not aware of what happened also commeted.

“When we talk intently about what we’re building here, we mean thoroughly and completely,” Arroyo said. “Each of our players, especially our senior leadership, must recognize that when we go out in public we’re representing this team, this university and the alumni and fan base. How we conduct ourselves in public is just as important as how we do on the field. I was made aware of Max’s recent statement and it is apparent that he also agrees.” 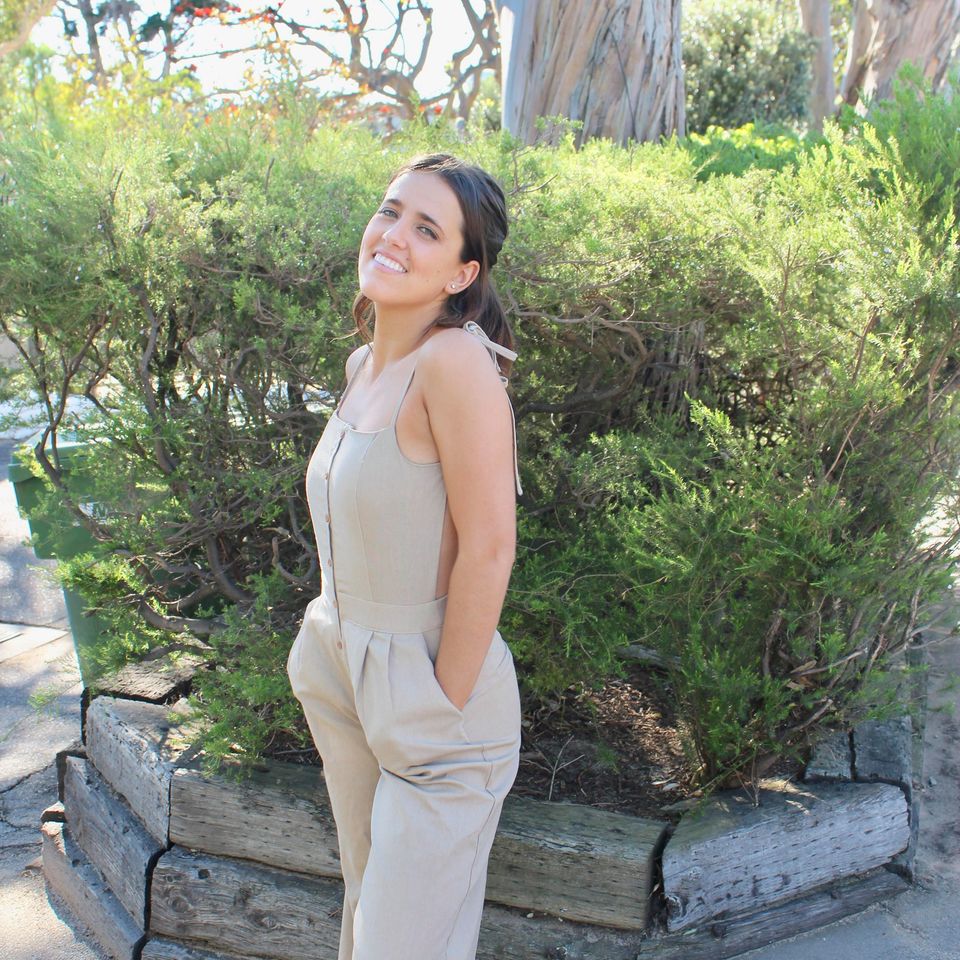 Nikole Adena Prelooker  mental health counselor in Westlake Village was born on April 6, 1997, in Woodland Hills, California. She is the eldest child of Daniela Ariana Caluori and Javier Prelooker, also proud parents of her younger brother Luka, who according to her college biography plays basketball.

Her father Javier Ignacio Prelooker originally from Buenos Aires, Argentina, is the vice-president  at Condista Ad Sales in Miami and Los Angeles. 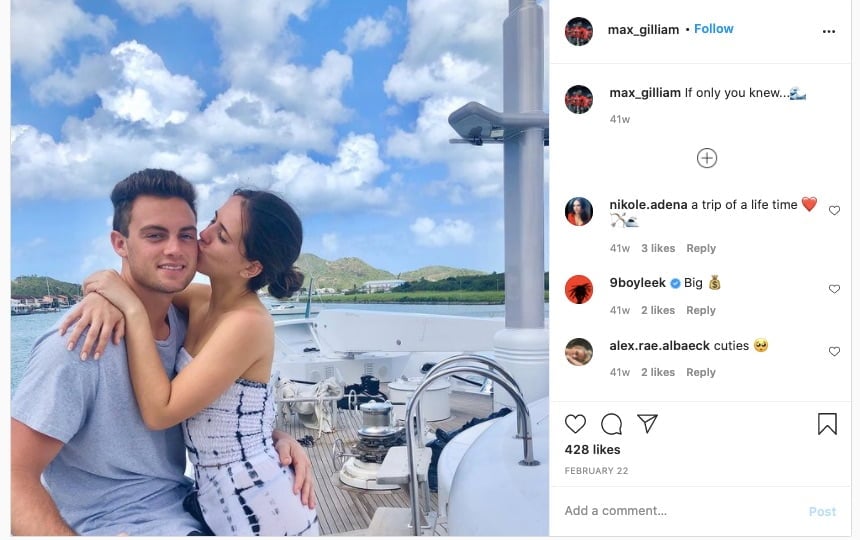 Made her debut against UC Santa Cruz on September 1, 2015; played in 20 games during the 2015 season, helped her team to four shutouts and a 1.35 goals against average. 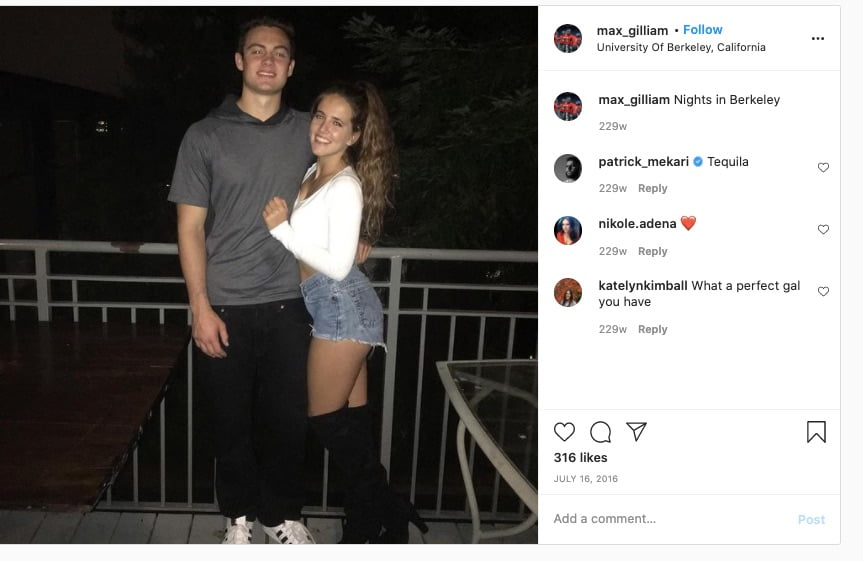 Nikole played in 21 games with the Regals, finished with 12 shots on goal and .500 shot on goal percentage. 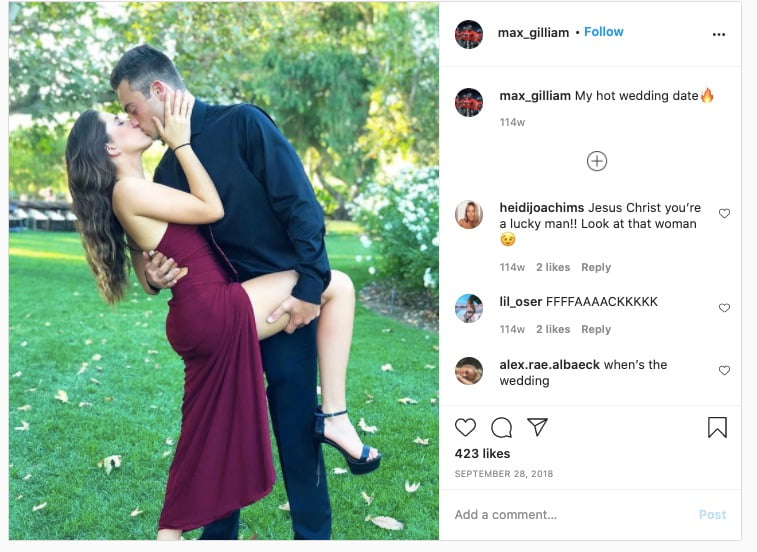