27-year-old Newcastle United striker Papiss Cisse is dating  the current Miss Newcastle, Rachelle Graham. The couple was attacked by racists who oppose to their mixed-race relationship because he is black and she is white. They were abused on a website after Rachelle was helping to raise money for his charity by skydiving from 13,000 feet.

Rachelle’s mom, who was astonished at the language used to describe her daughter and her boyfriend, reported the website to the police who is investigating the abuse as a hate crime.

Rachelle said to to Sky Tyne and Wear:

“It is horrific. The website targets the pair of us because I am white and Papiss is black. Some of it is really threatening. I don’t understand why people would say these things, especially as Papiss is such a nice guy. I guess we just have to ignore it and move on.”

The abusers also set up a fake Twitter account in her name which has been already suspended. Rachelle said:

“The first I knew of it was when I started to get messages from friends responding to tweets I had not sent. This person was sending out abuse and saying I was no longer with Papiss, and would use racist terms. They put up pictures of monkeys with knives, and would change newspaper stories on him, using terms like “imported from Senegal”.

Papiss has seen this kind of racism before, and said we should ignore it. But I think it’s not on and we have to do something to stop it.”

Rachelle managed to raise £900 for Cisse’s charity, Friends of Sedhiou. 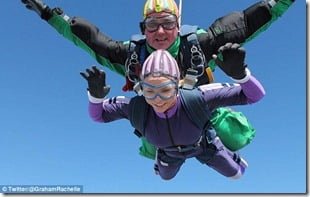 Rachelle Graham is 21 years old. She is from Edmundbyers, in County Durham. Besides being a beauty queen she is a cafe owner, running Poppy’s sandwich and cafe bar in posh Ponteland on the outskirts of Newcastle.

She speaks English, Spanish, and French. Rachelle was crowned Miss Newcastle last May and is representing Newcastle in Miss England 2013. She is sponsored by Nepali Dental Studio.

The couple has been together since approximately seven months, but she insisted:

Rachelle said she goes to all of his boyfriend’s home games, and that she’d never been to a match before he met Papiss. She also said she is not a big fan of cooking and they tend to go out most nights for food.

Rachelle’s mom, 46-year-old Val, has given the relationship her blessing. She said: