Meet beautiful Jamie Alvarez;27 she is married to mixed martial artist Eddie Alvarez. Her hubby is a lightweight fighter out of  Philadelphia, Pennsylvania; initially joined the UFC on  August 19, 2014.

Jamie who is a mom of three little boys has her hand full for sure, she is also from Philadelphia and surely is without a doubt her hubby’s weakness! During an interview, Eddie was asked who is his biggest support and the 5 ft 9 in fighter had this to say about her

First and foremost, it’s my wife, my biggest supporter of all. My wife and kids. My kids don’t have much of a choice. If me and my wife decide, they pretty much have to go. It’s been my wife more than anything who has been behind me through this and she’s just one of them down chicks who, she’s for the dream. She’s for the goal. She’s on board no matter what. She picked her own three kids up, left her home and everything, left everything that’s comfortable to her to pursue this dream of ours, not just mine. It’s my wife first and foremost. 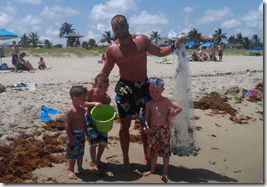 Wife, Mother ,Daughter, Sister .. A Women of Many Wonders

The blue-eyed, smiley blonde helps her husband keep his focus more than ever, now that Alvarez will continue to try to put all the controversies aside and focus upon the task at hand, which is dismantling Chandler to the point no one wants to talk about a third fight between the two, he reportedly said.

And even though she must be used to Eddie’s long training hours she knows he will make up to her for the lost time saying:

My family and I hang out whenever I’m not fighting. We go to the movies and the playground to enjoy time together.

Jamie has one TV credit, last year she appeared on the series MMA Uncensored Live as Eddie Alvarez’s wife.

Her fighter husband last fight was when Alvarez defeated Shinya Aoki on 4/20/12 by TKO at Bellator 66.