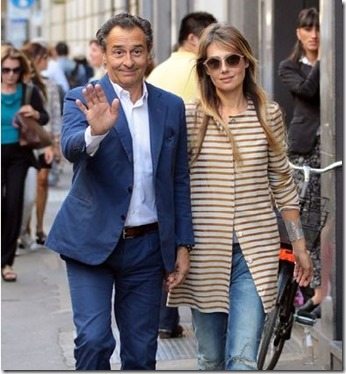 Meet Italian Novella Benini, the lady in the eyes of Coach Cesare Prandelli. Her man was a former player, born in Orzinuovi  Italy in 1957 he played six seasons with Juventus as a midfielder.

The couple has been  spotted in several outings, the enjoyed quiet evenings and strolls on the streets of Milan.

Her 56-year-old boyfriend was previously married to Manuela Caffi, whom unfortunately died in 2007 after battling breast cancer for six years. The couple had two children Carolina and Nicolò, who has also embarked on an off-pitch football career. Prandelli resign from his coaching post at Roma only days after his signing to care for his wife when she was diagnosed in 2001.

Following the death of his wife he found love once again in Novella Benin. The story of their love affair took center stage a few years ago while Italian media speculated about their relationship after several pictures of them hanging out. Novella appeared several times in the company of Prandelli but nothing was said officially. It was Prandelli who during a television interview revealed, deliberately that he had “re-found love, without which I could not live.”

Little is known about her, but what we can say is that she is certainly not inferior to other wags. Novella who is in her 40’s and still going strong! With her looks and body figure she does not go unnoticed.

They have been linked together for the past three years, meaning their love story began somewhere in 2011 and met even earlier but hey, the man is a widower is not like he is cheating on his wife and he deserves to be happy after all his hard work with the national team. In 2012 he coached Italy and brought it to the finals and even though he lost, it was said he coached Italy at its best.

There is no doubt she is a good influence for Prandelli, the couple appeared last year on a “no smoking” campaign talking about how happy she is that her man had left the cigarette.

Coach Cesare Prandelli has opened Italy’s training base in Brazil to wives and girlfriends and Novella said “Here” she sure will be seen supporting Mr. Prandelli as he faces Costa Rica today!