Ron and Nellie Biles are the two of the most important people in Simone Biles’ life. The US Olympic gymnast, her two brothers, and sister Adria were raised by their grandparents Ronald and Nellie Biles who adopted them after Simone’s parents  Shannon and her husband were incapable of looking after her four young children due to drug addiction.

Simone Biles is one of four children born to Shannon Biles, whose parental rights were terminated due to her drug addiction; Simone and younger sister Adria, who is also a gymnast, were adopted by their grandfather Ron and his wife Nellie, who is not Simone’s grandmother. Nellie Biles recalled the transition wasn’t easy, but adopting her daughters was the best thing that could ever happen to her.

“I don’t think you could prepare yourself for something like that. Being a grandparent… that’s not something you can change. But then making a decision to adopt Simone and her sister…”

“Over time you take your barriers down and that goes both ways,” explained Nellie, who lives up to P&G’s slogan that ‘It takes someone strong, to make someone strong’ as part of the company’s “Thank You, Mom” Olympic campaign.

“Me taking my barriers down and the children taking their barriers down and before you know it there is unconditional love that’s there between both of us, or between myself and my husband, and Simone and her sister.

“That goes for her brothers too, they feel the same way. It’s not something you can plan, it just happens.

“Making a decision to adopt Simone and her sister … it was the best decision we made.”

For Nellie Biles, Simone is not her granddaughter; she is her daughter.

“The best thing about being Simone’s mum is looking at your child who sets goals for themselves and works very hard towards their goals. And when you see the outcome, it’s great to be Simone’s mom, it’s a very, very proud feeling.

“The worst part of being Simone’s mom is that at times she is a very stubborn 19-year-old teenager that I could just kill at times,” she added as mother and daughter both dissolved into laughter.

Shannon Biles, mother of Simone, Adria, and sons Ronald and Adam, struggles with drug addiction, and being a single mother, her children’s father abandoned her.

Ronald and Adam were adopted by an aunt, and Simone and Adria, ages 6 and three, were adopted by maternal grandfather Ron Biles and his second wife, Nellie. In the beginning, Ron and Nellie were grandpa and grandmother for the girls, but after Nellie told them it was up to them if they would like to call them mom and dad, there was no turning back.

“I went upstairs and tried practicing it in the mirror—‘Mom, Dad, Mom, Dad.’ Then I went downstairs, and she was in the kitchen. I looked up at her and I was like, ‘Mom?’ She said, ‘Yes!’ ” Simone recalled.

Belize native Nellie Biles worked at a nursing home and Ron air-traffic-control systems all over the country for the Federal Aviation Administration until 2010, when he retired.

Ron and Nellie Biles devoted themselves to the girls; they helped Simone and Aimee Boorman, a former competitive gymnast and one of the coaches at Bannon’s (the gym where Simone started training) when she needed psychological help to cope with the stress.

They have and continue to be Simone’s biggest supporters and loyal fans. 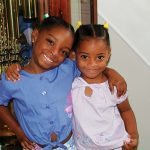 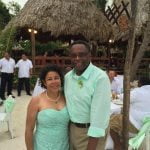 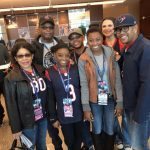 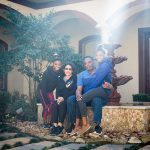 The Simone Biles and Shaq photo moved to viral heights in a matter of minutes!

Simone Biles and former NBA player Shaquille O’Neal posed together for a photo after the Super Bowl LI; Simone tweeted the photo and soon got over 50,000 retweets. Shaq’s height is 7’1 (2.16), making Biles’ 4’8 (1.42 cm) frame looked even tinier. 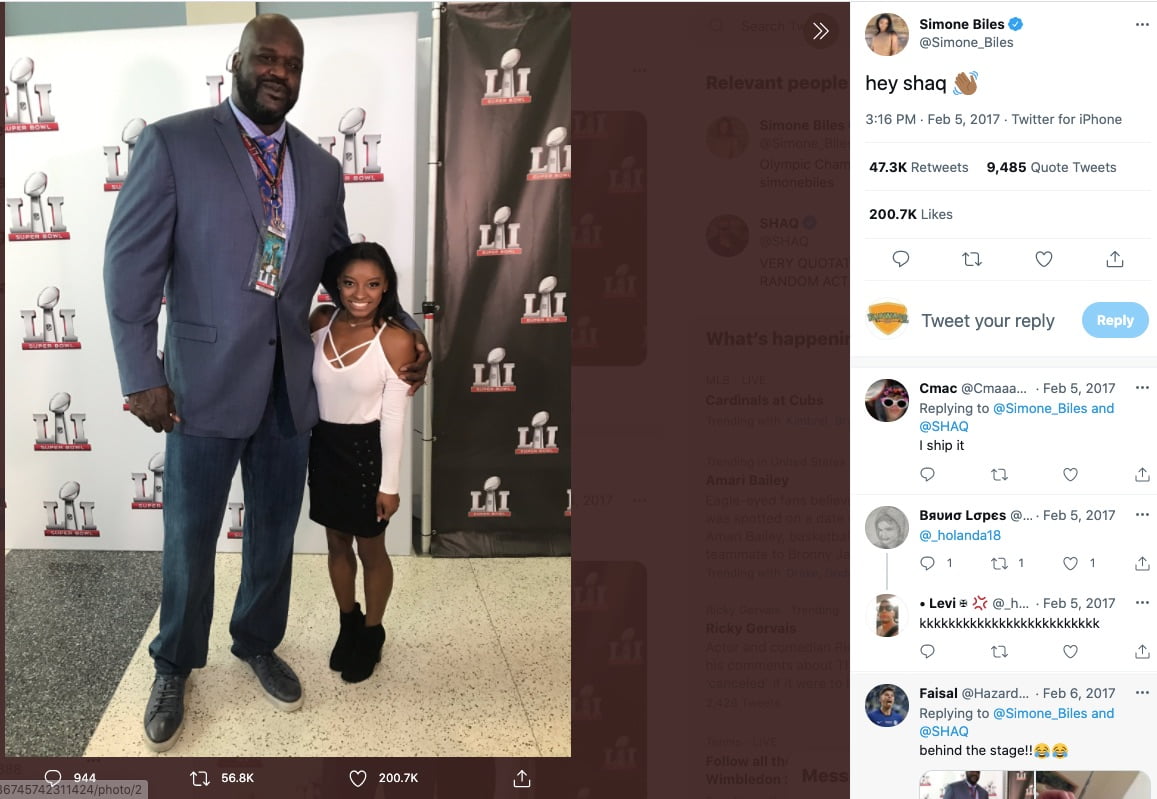 According to Wealthy Gorilla, Simone Biles has a net worth estimated at $2 million. Simone has earned her fortune from her endorsement deals with Octagon Sports Agency (since 2015), Nike (Nov. 2015 to April 2021) and GK Elite Sportswear (since Nov. 2015), Kellog’s (August 2016), Proctor & Gamble, United Airlines & The Hershey Company (After the 2016 Summer Olympics in Rio), Mattress Firm (since Sept. 2016), Spieth America and Beats by Dr. Dre (2016), joined Gap’s Athleta Brand in April 2021, after ending her partnership with Nike. 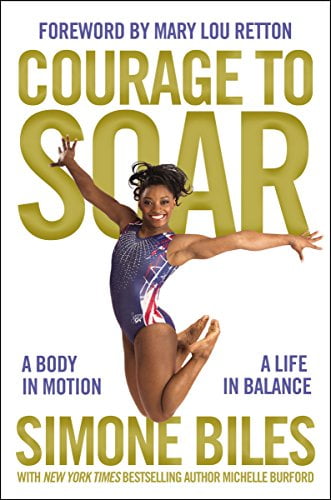 Simone Biles also earned from the sales of her book Courage to Soar: A Body in Motion, A Life in Balance, available on Amazon if you are interested in a good read. 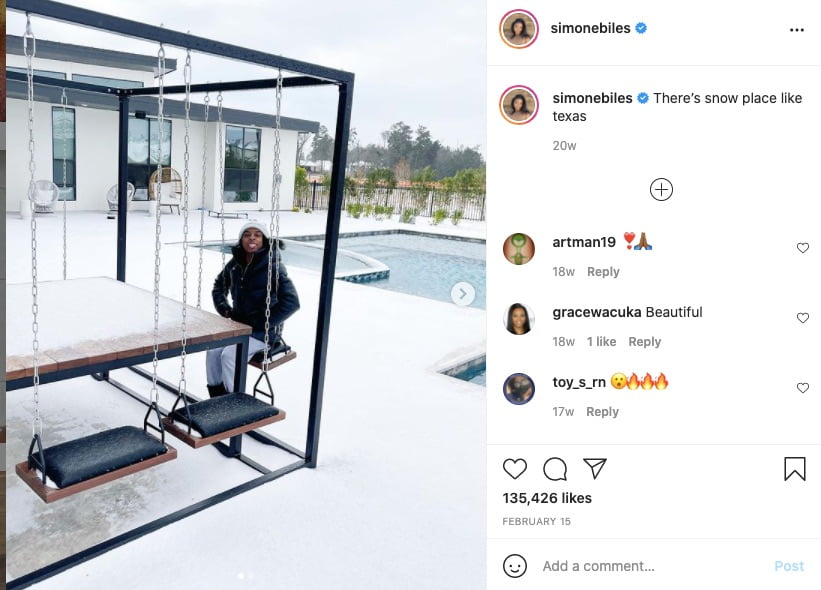 Over the years, we have met some of the handsome guys Simone Biles has dated. She is currently not single, and once again, she has fallen for an athlete; this time is an NFL player who didn’t even know she was a famous gymnast when he met her. 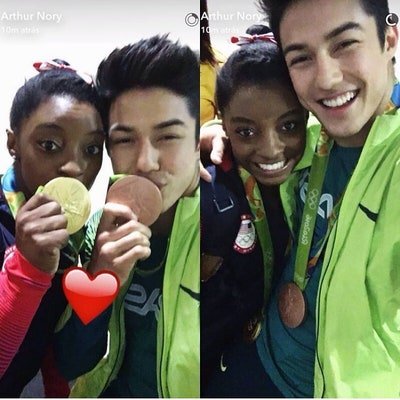 Their whole alleged relationship started after Arthur posted a photo with Simone with the caption My U.S. Girl. 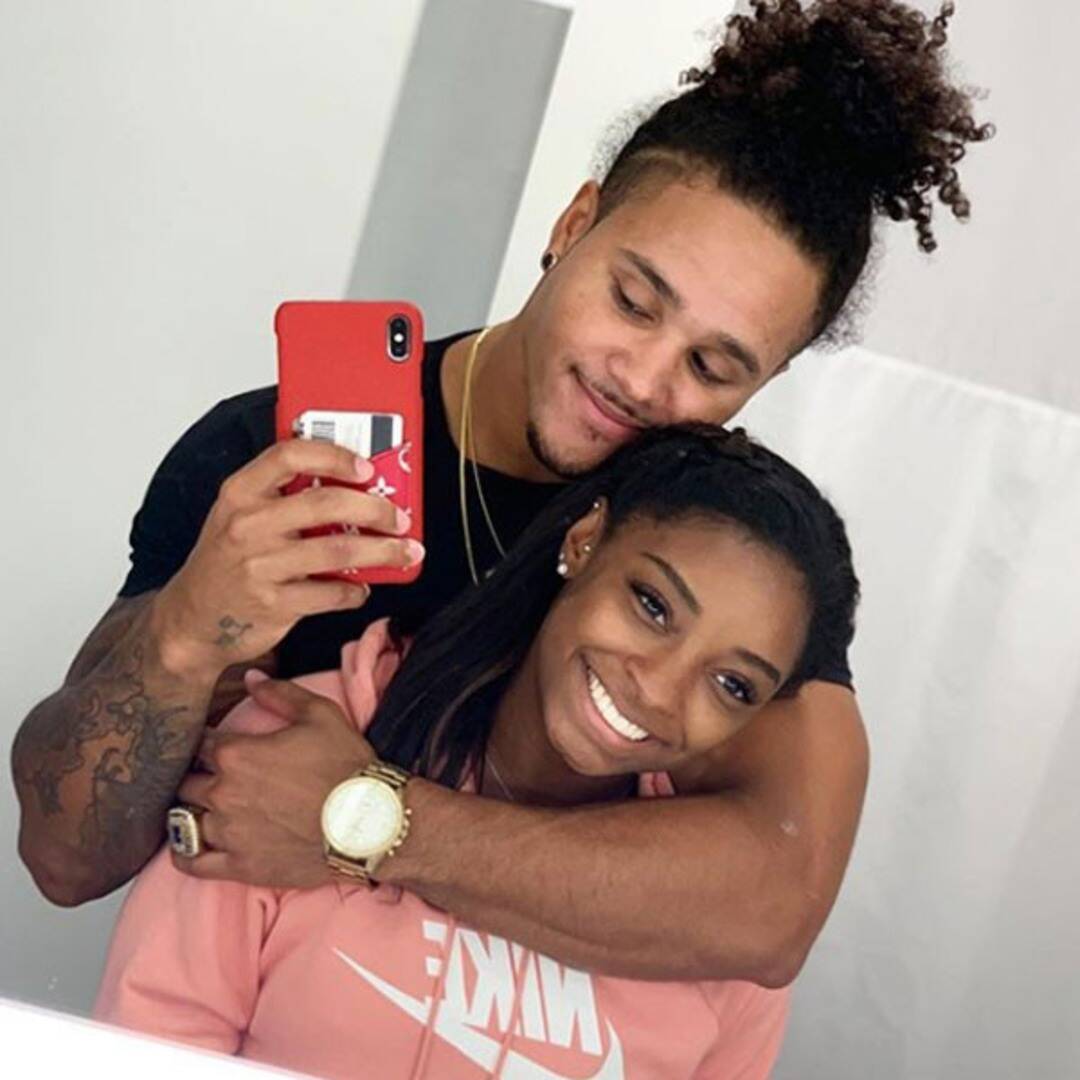 Jonathan Owens and Simone Biles came under the radar in August 2020 when she posted a photo of them on Instagram. 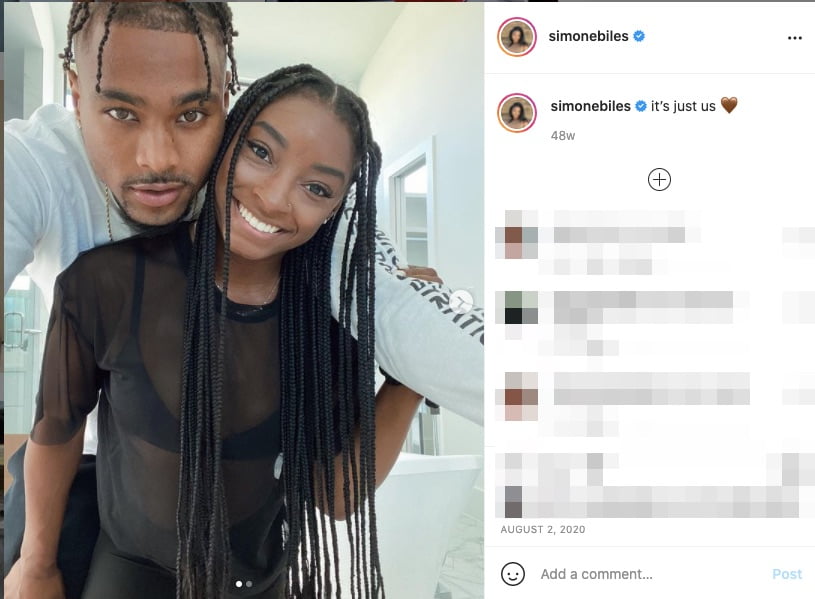 5’11 Owens was born in St. Louis, Missouri, on July 22, 1995, to Arthurine Cannon. Jonathan attended Christian Brothers College and subsequently played football at Missouri Western State from where he also majored in physical therapy in 2018.

Following the 2018 NFL draft, he signed a deal as an undrafted free agent with the Arizona Cardinals. He was included in the roster on November 21, 2019, but waived two days later and assigned to their practice squad.

Simone Biles Dancing With the Stars

Simone Biles participated in season 24 of dancing with the Stars becoming the fifth gymnast to participate in the show; her dancing partner was professional ballroom dancer Sasha Farber. Simone dance Tango (scores 8, 8, 8, 8) on DWTS’s premiere.

Simone Biles has over 4.2 million followers on Instagram; there, you can check what her life is like when she is at home, with her family, boyfriend, and friends.

Simone Biles is on Twitter; she keeps her 1.2 million followers updated with everything she is up each day. She is only following 333 people there.