Ronda Rousey is the UFC undefeated  Women’s Bantamweight Champion, but getting to where she is wasn’t easy, she had a tough childhood and ran  away from her home  at age 18. Ronda’s mom raised her and her sisters after her father Ron Rousey committed suicide. 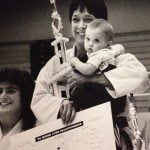 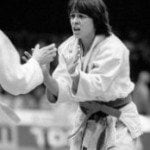 Ronda was very young when her dad took his like, but he played an important role in her life. While mom worked, Ron stayed worked  and took care of the girls, especially the youngest Ronda  who was born asphyxiated by her umbilical cord, doctors told AnnaMaria her baby was dead, she cradled the limp, tiny, and already blue body of her daughter, who miraculously started to move, doctors feared the lack of oxygen would cause irreversible brain damage. She was walked, but she had speech problems.

Hе married Ann Maria Waddell July 27, 1985, in San Diego. They had three three daughters together Maria, Jennifer and Ronda. He had three more children from a previous relationship, Cristy, Todd, and Jeffery.

It was thanks to him that she became involved in swimming, she started with the Santa Monica Swim Team, but even as a young girl she was faster than most her girls her age. Ron saw his girl’s potential, he would wake her up at 3:00 a.m and took her to every practice, he was by her side always, their bond became stronger.

Not log after that Ron relocated his family to Minot, North Dakota, AnnaMaria took a teaching job and Mr. Rousey decided to retired from Rohr Aircraft Industries, but he found the life of a retire man much too boring so he found a job at a plant  120 miles east from home, at Devil’s Lake as their director of research and development.

The long dull drive became too much, so he decided to stay at the plant during the week and drive home on the weekends, Ronda went to live with Ron in an effort to help her with her speech, at home her  sisters who learned who to understand her gargled language translate for her.

One day Ron took the girls bobsledding, he took the first turn, his sled slammed into  a snow bank and he is flung towards, landing on what it seemed like a snow back, but beneath the snow was a big log.

Ron broke his back and require surgery to fixed his damage spine with the help of metal rods. Time passed, he was still in excruciating pain and he was not getting better. He went to see the doctor for a reexamination and they discovered Ron is suffering from Bernard-Souiler Syndrome.

This syndrome prevents Ron’s body from forming blood clots, preventing his to heal and causing regression. The prognosis was fatal, he was told he’ll become paraplegic within months and quadriplegic not long after that, in other to live he’ll need a ventilator, they told him he had two years to live.

For Ron a former soldier requiring around-the-clock care to help him eat, bathe and help him to the toilet was embarrassing and painful, but not as much as picturing his children watching him with tubes all over his body in a hospital bed, that was not the memory he wanted his girls to have of him, so he made a sad decision.

On August 11, 1995 Ron Rousey drove to  a pond where he had taken his girls so many times, hooked a hose to the truck’s exhaust and died. He left a suicide note, explaining his reason for killing himself, he also wrote Ronda Ronnie as he called her was set to do great things, she is special, somehow, someday she will end up in a podium. He wrote.