Stéphanie Frappart, the French football referee is ready to make history as the first female to officiate in a major men’s European match.

Frappart will be taking charge of the UEFA Super Cup between Chelsea and Liverpool in Istanbul. The 35-year-old has certinaly had a big year for her career. She was the referee for the Women’s World Cup final between the USA and the Netherlands just last month.
Check out everything you need to know about Frappart below. 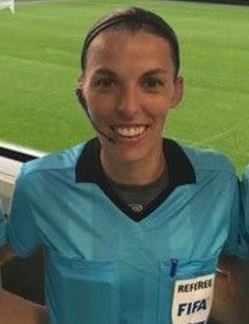 #1 She is a former player

Frappart, from Herblay-sur-Seine just north of Paris, picked up the whistle full-time in 2001 after deciding against pursuing a playing career. She played football at home in the Val d’Oise, then around 13 years old became interested in the laws of the game.

She was appointed by UEFA, European football’s governing body as part of an all-female on-field referee team for the match between the winners of last season’s Champions League and Europa League. She was previously appointed at the European u19 Women’s final in 2012.

#3 She is having a big year

In April, the 35-year-old Frenchwoman became the first female referee in Ligue 1. After two games in the 2018-2019 season in the highest league in France, she now has been promoted to the highest refereeing group in France for the 2019-2020 season.

For the Super Cup, Frappart will be joined by the two female assistant referees who she worked with in the Women’s World Cup final – Manuela Nicolosi of Italy and Michelle O’Neill of the Republic of Ireland. She has stated “Young girls see me on TV and know it’s possible. I hope this will stimulate them to pursue their vocations.”

#5 She is backed by UEFA chief refereeing officer Roberto Rosetti

UEFA chief refereeing officer Roberto Rosetti insisted Frappart ‘fully deserves’ the opportunity.
He said: “Stephanie has proved over a number of years that she is one of the best female referees, not just in Europe but across the world.

#7 She has felt disrespected for her gender in the past

According to The Guardian, Frappart says that since she began taking charge of men’s professional matches, there have been only very few times when she felt disrespected on the grounds of her gender. One of them, no doubt, was in October 2015 when the Valenciennes manager, David Le Frapper, railed against the non-award of a penalty to his team during a 0-0 draw with Laval.