The right pronunciation of Taylor Heinicke’s last name is hi-nuh-keee; he has been so kind to add it to his Instagram account. 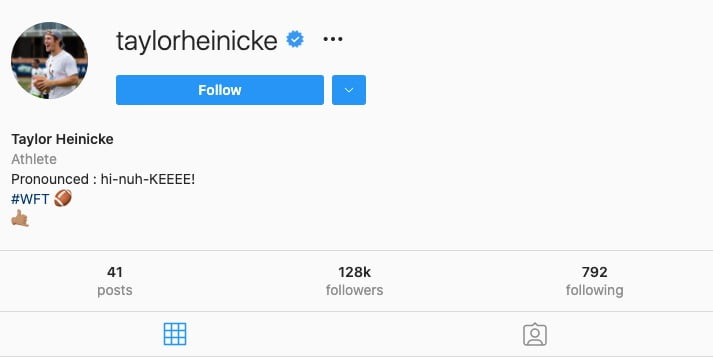 And his last name is not the only thing people sometimes get wrong, as we found that a few people have called him Tyler Heinicke instead of Taylor.

Washington Depth Chart after Ryan Fitzpatrick’s injury is listed below. 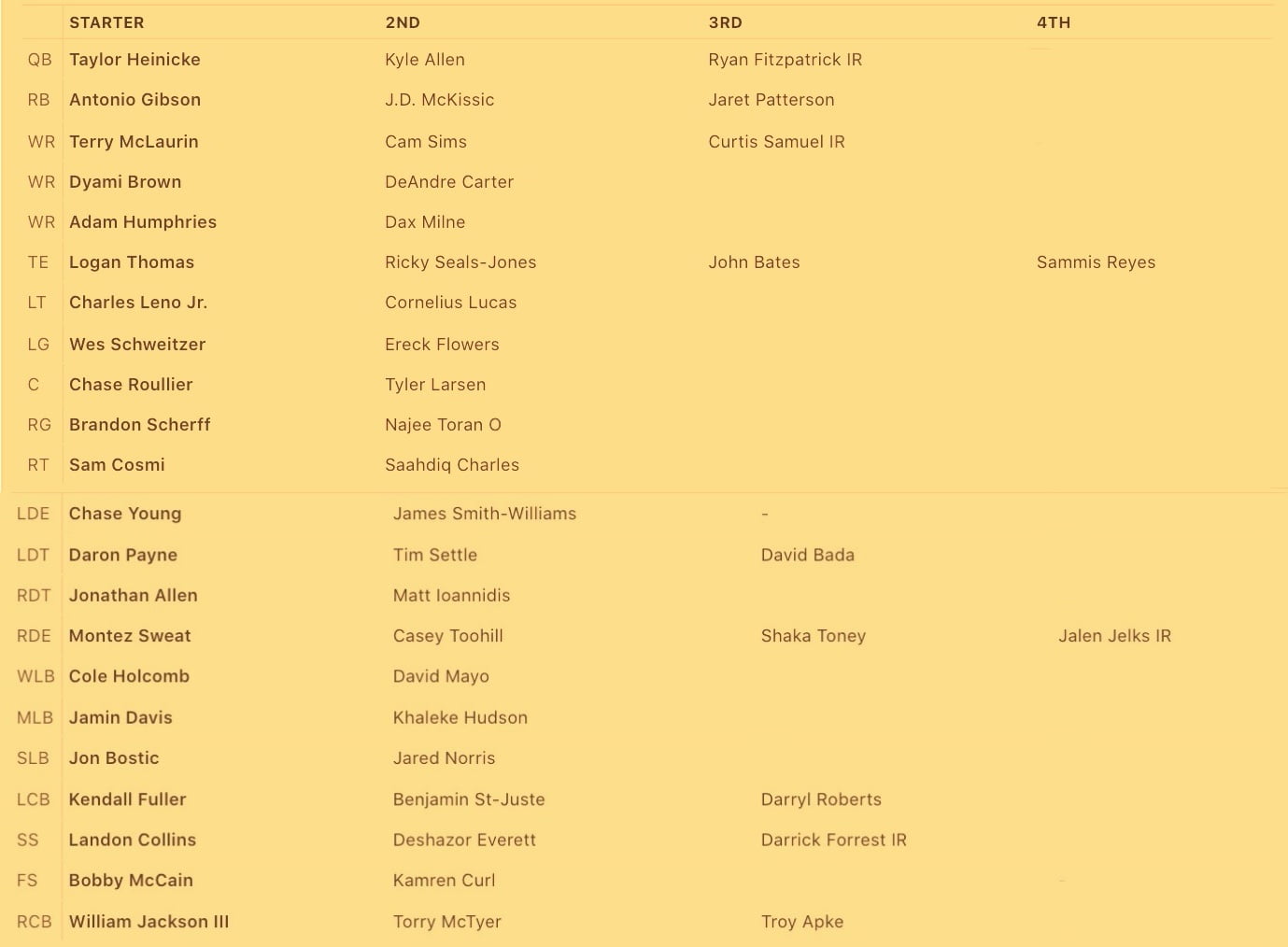 Taylor Heinicke has an estimated net worth between $1.5 to $1.7 million. On February 10, 2020, Heinicke signed a two-year, $8.75 million contract extension with the Washington Football Team, earning a base salary of $1 million. His previous contracts and salary are as follows:

No, Taylor Heinicke doesn’t seem to have a girlfriend at this moment; Heinicke is not married either and doesn’t have any children. 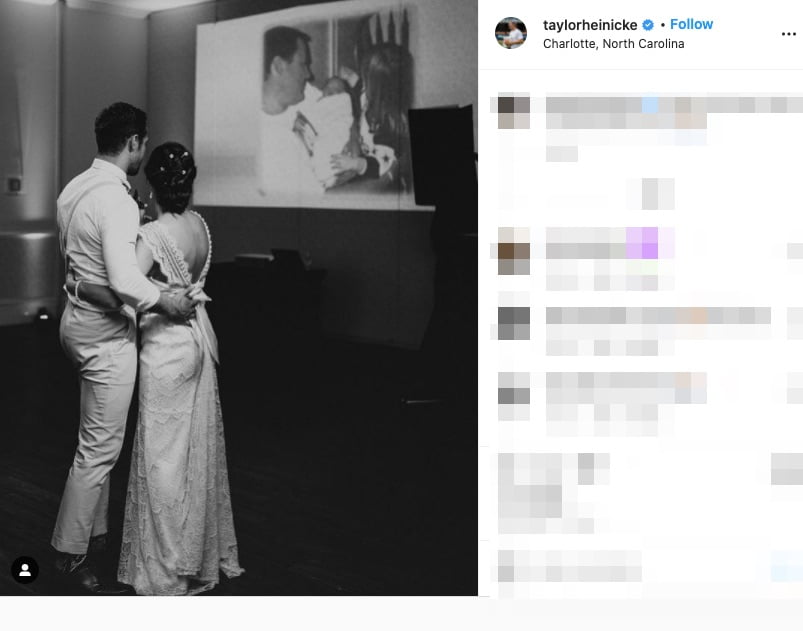 You probably have seen him posing with a stunning gal on Instagram; her name is Lauren, and she is his sister. 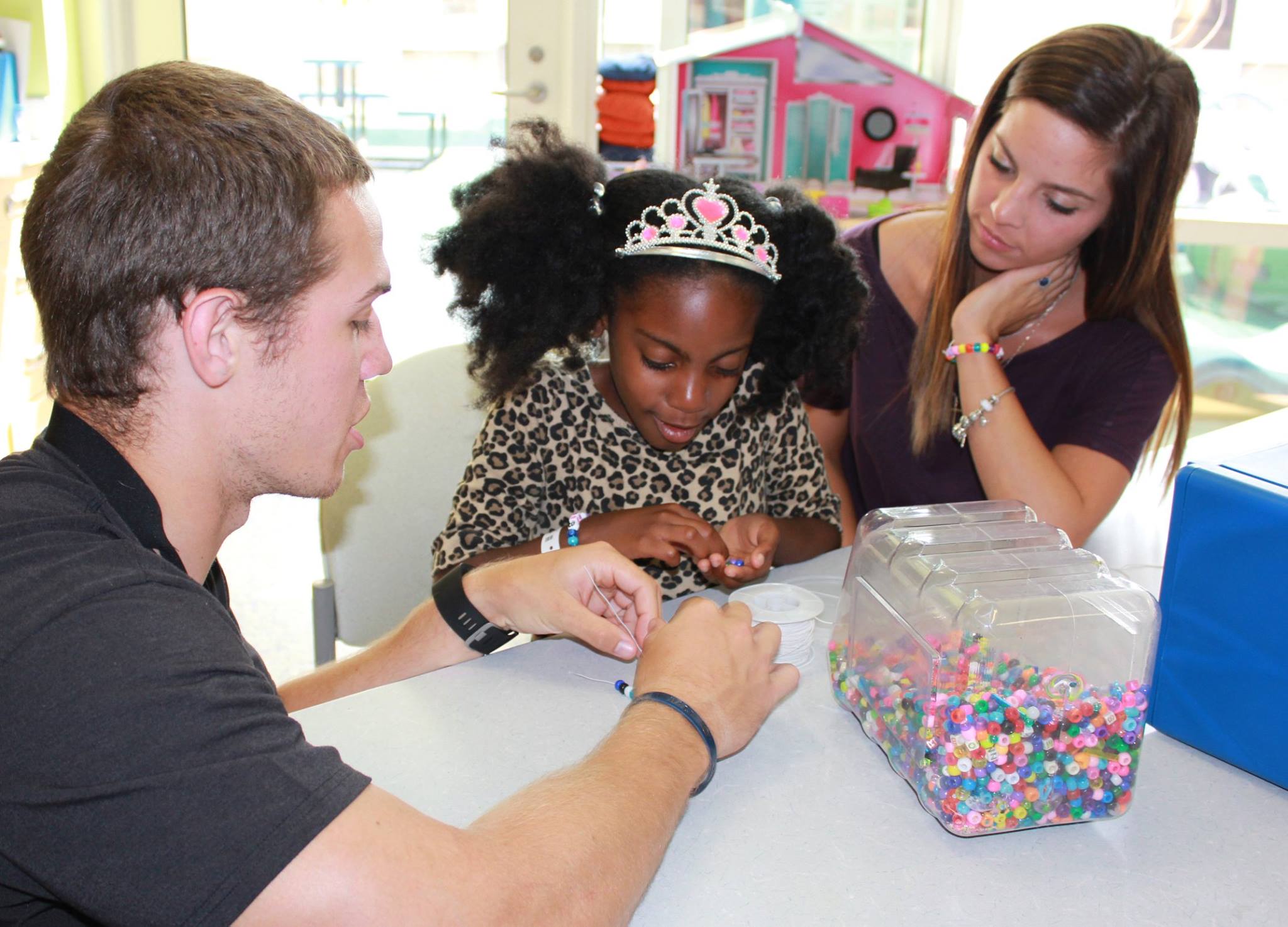 Taylor Heinicke may be single at this moment, but there was a time when he dated Casey Fehrle. Heinicke and Casey Fehrle met while they both attended Old Dominion University; they dated for several years until 2018 or 2019, when Casey, now an ophthalmologist, started dating Alex Kliesh, father of her adorable son Hudson born in May 2020. 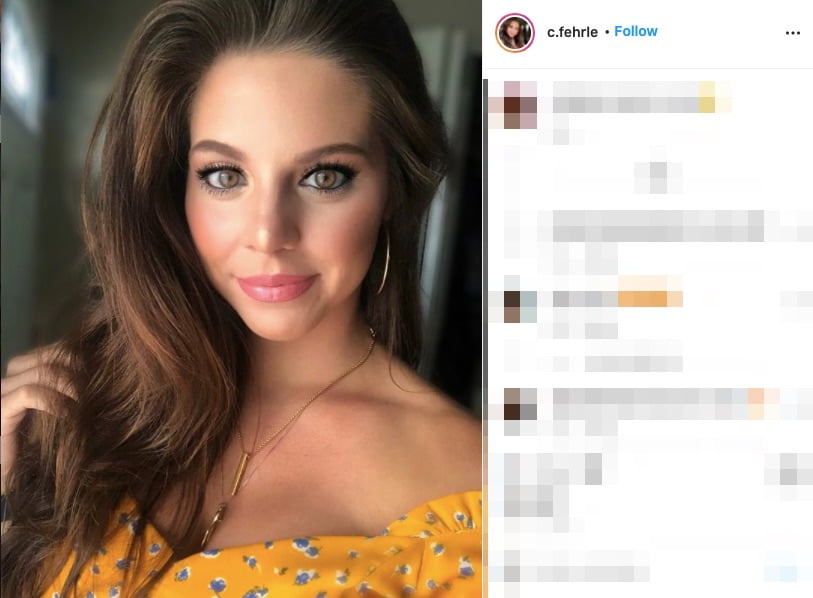 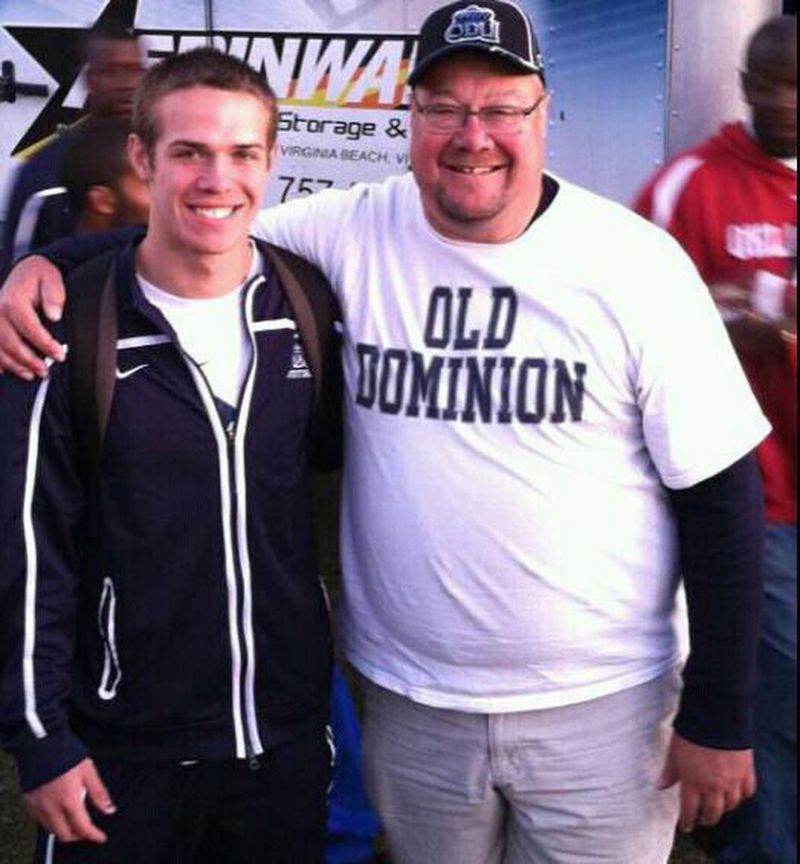 Brett Heinicke was responsible for getting Taylor into football; he was his son’s biggest fan and best friend, without a doubt.

He was my best friend,” Taylor said. “I would say he’s like the best father. He did everything for me. That hit hard.”

“He’s the one that got me a scholarship to ODU,” Heinicke said. “He sat there and made a highlight video for me, and he mailed it to literally 250 college around the East Coast and took me to 10, 15 camps each summer – doing whatever he could to get me a scholarship.” Taylor said.

Former sporting good seller Brett Russell Heinicke was born on November 4, 1961, in Racine; he played the state golf championship in high school and later at the University of Hawaii. Mr. Heinicke was 50 when he died of a heart attack in Lawrenceville, Georgia, on December 16, 2011. At that time, Taylor was playing at Old Dominion. Still, on the eighth anniversary of his tragic death, the Panthers honored Brett Heinicky saving him a seat at the Bank of America Stadium. 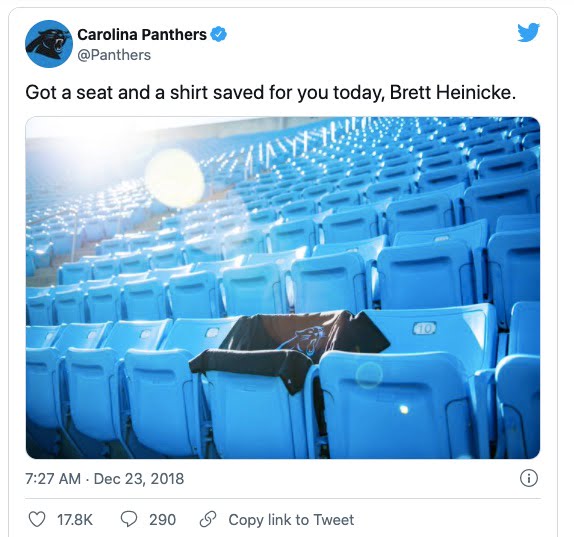 Pin
Taylor Heinicke immortalized his dad with a tattoo on his left arm; Heinicke’s tat, said Dad, includes Mr. Heinicke’s birthdate and date of his passing, a praying angel in the clouds the bible verse from John 16:22.

“Now is your time of grief, but I will see you again and you will rejoice, and no one will take away your joy.” 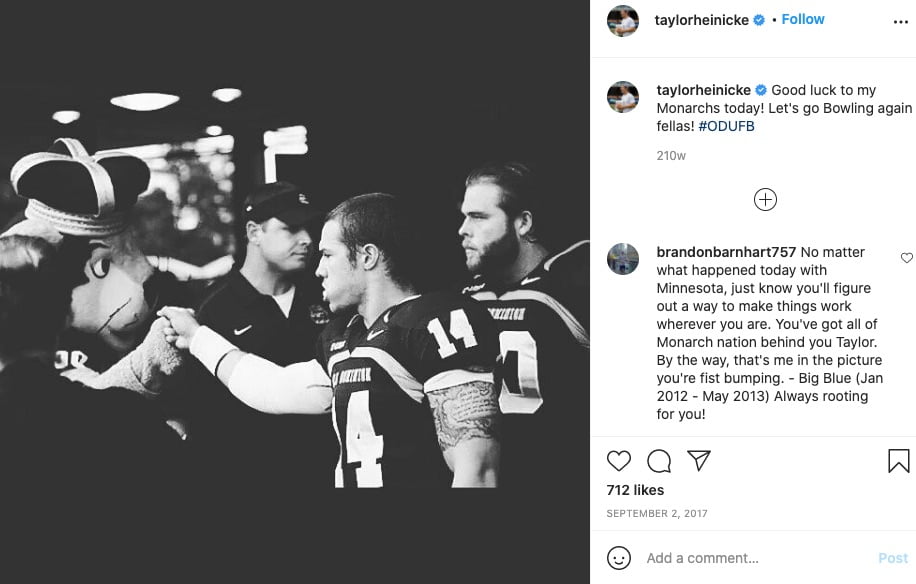 Taylor Heinicke’s mom, Diane Dodsworth born Diane Marilyn Parrish on October 25, 1962; Diane Dodsworyh is a Business Systems Analyst for Coca-Cola in Atlanta. She and Brett Heinicke split up and had amicable divorce years prior to his death. 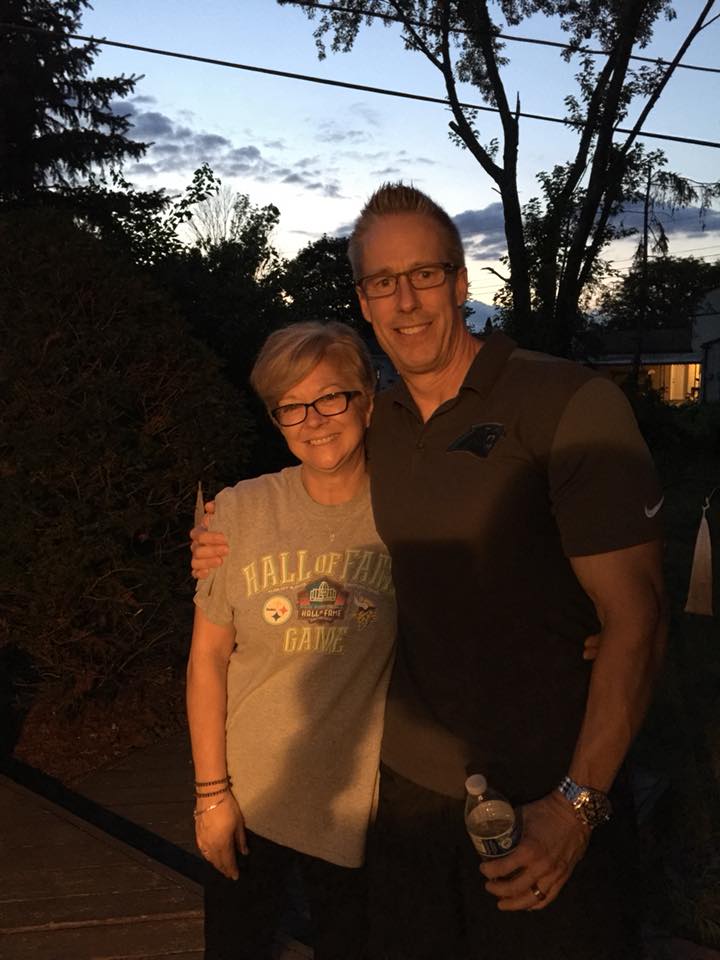 On July 3, 2010, Diane remarried former bodybuilder Mike Dodsworth, who was her prom date; he studied marketing, management, and economics at Miami University and is a medical device seller at Bayer Healthcare. 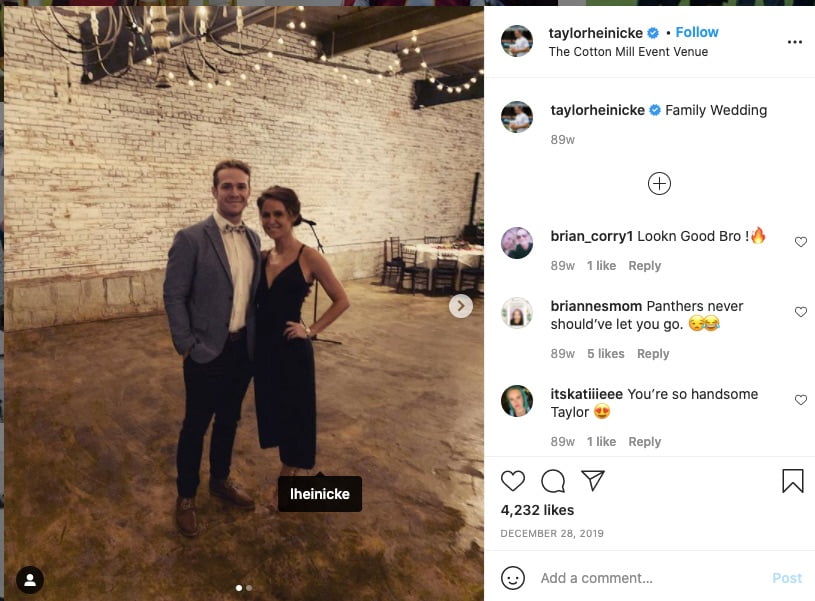 Heinicke’s beautiful older sister was born Lauren Heinicke McAndrew on March 2, 1989, in Georgia. Lauren Heinicke graduated in 2012 with a Bachelor of Science in kinesiology from Kennesaw State University and, in 2014, got her post-baccalaureate certificate in technology/Science-radiation therapy from the Cambridge Institute at St. Joseph’s Atlanta.

She is a clinical applications support specialist at Vision RT in Atlanta; before that, she was a Proton Radiation Therapist at Emory Healthcare, Northside Hospital, and DeKalb Medical. Lauren is married to Justin McAndrew, a coach At Johns Creek Fit body.