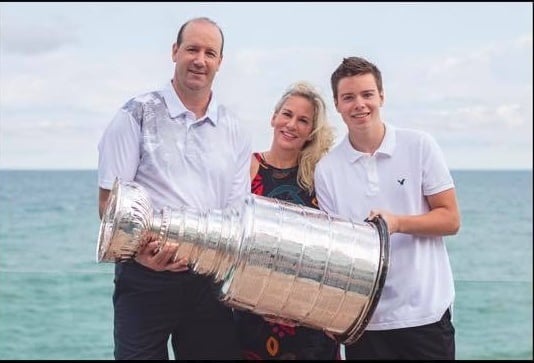 Meet Mrs. Shelby Anderson Reirden! She is the pretty wife of NHL coach Todd Reirden, former NHL defense and current head coach for the Washington Capitals. He previously served as an assistant coach for the Capitals under coach Barry Trotz.

As a player, Reirden played doe the Edmonton Boilers, St. Louis Blues, Atlanta Thrashers and the Phoenix Coyotes. Initially drafted by the New Jersey Devils in the 12th round (242nd overall) in the 1990 NFL Draft; however, he opted to play for the Bowling Green Falcons at Bowling Green University in Ohio.

Shelby and Todd met in Texas while he played in the International Hockey League, they married in early 2000, in Indiana and spent their honeymoon in Hawaii.

After their wedding they decided to stay in Valparaiso; their only son Travis was born in Crown Point, Indiana in May 2002. Travis was born with a disorder that leaves his body unable to defend against bacteria and viruses called Common Variable Immunodeficiency.

Shelby is the owner of the kids’ hair salon Locks Of Fun, located in 155 W. Lincolnway in Valparaiso.