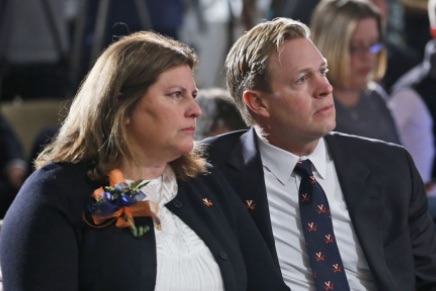 This lovely lady is Holly Mendenhall; and she is the beautiful wife of Bronco Mendenhall, head coach of the Virginia Cavaliers at the University of Virginia.

He started his coaching career at Oregon State in 1989; two years later he joined Snow College and Northern Arizona in 1993. Mendenhall returned to Oregon State in 1995; subsequently joined Louisiana Yech in 1997; the following years joined New Mexico and eventually, BYU hired him in 2003. Finally, on December 4, 2016, The Cavaliers announced they hired Bronco as their new head coach.

As noted Bronco Mendenhall’s wife is the former Holly Jo Johnston, born on February 16, 1967. She graduated with a degree in French from the University of Montana. Before becoming the wife of a football coach and right after college, Holly worked six months at Euro Disney in Paris

They sure chose particular names for their sons, here is Holly’s explanation for that.

Cutter Bronc — “It’s after cutting horses. It was the name we picked whether it was a boy or a girl.”

Breaker Blu — “It comes from the break in the waves, and Bronco loves surfing. Breaker is also the name of a famous horse trainer.”

Raeder Steel — “We named him Raeder after my father, Rae. We both liked Steel for the middle name. People hear the names Bronco and Raeder and think we’re (Denver) Bronco and (Oakland) Raider fans.”

Back in 2018, Holly Mendenhall and her husband donated $500.000 for the construction of a new football facility for the School.

“Holly and I are excited to be a part of the process that transforms Virginia football,” Mendenhall said in a statement. “We love developing young people through football and the new football operations center will provide our young men a home where they can develop into exceptional football players, students and leaders.