22-year-old English soccer player, James Pearson is making headlines for allegedly getting involved in a racist tape! Pearson –who is a defender for Leicester City –and two other of his teammates are shown in a video obtained by the Sunday Mirror; in it, one of the men, can be heard using a racist insult against a woman.

The details of the video include one of the men, calling one of the woman “slit eye,” the Mirror reported, while another makes a crass comment about smell. 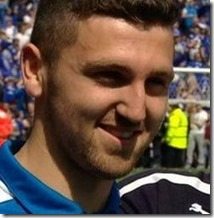 Also, either Pearson or Smith could also be heard asking Hopper to swap women before the video ends with Hopper and Pearson high-fiving.

James –who is also known for being the son of English football manager and former professional player, Nigel Pearson –was on a promotional tour in Thailand, to support the club’s corporate sponsor “Amazing Thailand,” that nation’s tourism board.

His father has coached Leicester City since 2010, according to BBC, Nigel has campaigned against racism and is a patron of the charity Show Racism the Red Card.

As you would imagine, no traces of social media profiles can be find at the moment to prove the existence of a girlfriend, but if James is currently in a relationship, we can rest assure he’s career is not the only thing he needs to worry about.

The players apologized for their behavior through a statement released by the club. An investigation is being conducted.