Well, you know what they say, from love to hate there is only one step away! From Houston, TX Erin Marzouki, who was well on her way to the altar with former Buffalo Bills defensive end, Mario Williams is now being sued by the very man she was supposed to get hitched!

The former couple met when Williams was a Texans player. Marzouki was listed as the Texans’ premium seating development manager in 2007 and 2008.

Erin was born June 27, 1981; she is the daughter of Jamel, 75, and Linda, 70, and is the sister of Nabil Marzouki, 42. Now the couple announced their engagement on February 19th of 2012 while the player lived in Texas; but apparently Marzouki out of nowhere called off the engagement earlier in 2013.

Now maybe just maybe Marzouki was not aware of this little detail; under Texas law, if a woman calls off the wedding, the man may be entitled to get the ring back because he gave it to his soon-be wife with the intent of marriage!

Now here is where it gets ugly, Marzouki’s former fiancee who reportedly has a six-year, $100 million contract, with $50 million guaranteed with the team; wants the $785,000 10-carat engagement ring he gave her and is taking her to court to make sure he gets it! Hmm are you thinking “vengeance”??

What’s even worse for Erin is her image is not looking any goo right now; according to the Houston-based lawsuit reportedly alleges that Marzouki never loved Williams and was only in the relationship for monetary gain.  As per the legal document:

[Marzouki] never intended to marry [Williams] and used the relationship as a means to get to [Williams’] money and acquire gifts, according to the Bleacher Report. 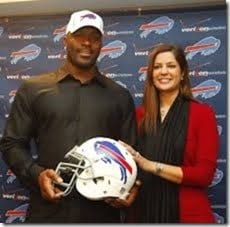 Ouch! Can you see her wearing the rock in the picture?? Now since in his mind they were going all out, Marzouki not only got the huge bling; but she also received an American Express card a month earlier to which she charged more than $108,000 then added an additional $230,000 worth of “luxury items” according to the lawsuit.

The pro-bowler reportedly asked for the ring back on several occasions, Marzouki allegedly failed to comply! What do you think? Does he really needs it back or is he making too big of a deal?? Guess Texas girls are tough cookies huh!

Furthermore,  37-year-old Erin who still has the huge diamond ring has not said anything about the whole things and even deleted her twitter account here.