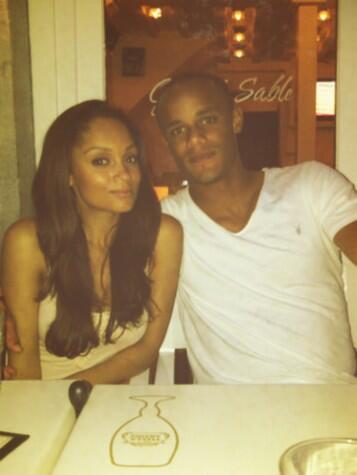 Carla Higgs aka Carla Kompany or Carla Higgs Kompany is the stunning wife of the Belgian  soccer player and captain of the National team Vincent Kompany who is also a center back player with Manchester City. Would you like to know a few things about Mrs. Kompany?

28-year-old Vincent Kompany was born Vincent Jean Mpoy Kompany in Uccle, Brussels. The 6’4” captain has been playing with Manchester City since 2008, before that he played with  Hamburg.

Komapany’s lovely wife Carla Higgs, 30,  a long time fan of Manchester City grew up in Irlam, Salford, they got married in a beautiful fairytale wedding on June 11, 2011, they live Manchester with their two adorable children Sienna (b. June 10, 2010) and a son Kai (b. October, 2013).