Meet the lovely Mrs. Angela Walton; this incredible lady is the gorgeous momma of Derrick Walton Jr. He is a point guard for the Michigan Wolverines at the University of Michigan. While her son’s story is fascinating, FabWags finds Angela to be quite a delight!!!

Angie gave birth to her wonderful boy on April 3, 1993, in Detroit, Michigan. Derrick first attended at Saginaw High School and subsequently, joined the Wolverines at the University of Michigan for the 2012-2013 season. He is pursuing a sports management major. 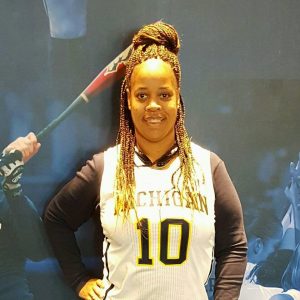 Angela and her husband Derrick Sr. had just one son, she speaks on the phone with him on a daily basis most of the time, or at least they text each other. However, there are times when she needs to list to his voice.

For example, do you remember that scary news when the plane carrying Derrick and the rest of the Wolverines skidded off the runway at Willow Run Airport?

“I was getting ready to put on my shoes and go there,” she said. “Zak Irvin’s mom called me. They are close, so we are close. She called me, and we were talking about what we knew. Then, he clicked in on the other end.”

A few hours later Angela heard from her boy; he was alright, just suffered a minor cut on his knee that required some stitches.

He had to get on yet another plane, scary as it was, the Wolverines flew, and Derrick was the star of the night. Angela Walton drove to see him play; she couldn’t be more proud!!!