The couple walked down the isle at a yacht club outside Paris a few days ago, and have stunned with their ‘out-of-the-blue’ nuptials.

Even if they’ve had a quick romance, it’s impossible to predict which couples will work and which won’t;  we’ve seen different matches through the course of history, we have star athletes paired up with models, singers, actresses, and then you alos have the ones married to ‘normal mortals’; but what can be better than joining your life to another athlete? Someone that understands your daily struggles and dreams, etc. 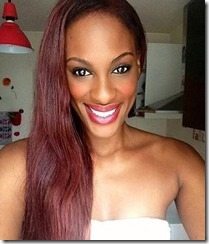 The couple tied the knot in France –where Diallo resides –and after the ceremony, reports say there was a lavish reception with cordon bleu catering and three cakes –which was attended by family members, Awa’s volleyball team and dignitaries from Senegal.

Diallo represents her national team and Stade Francais in Paris. The volleyball star participated at the 2014 FIVB Women’s Volleyball World Championship Qualifiers between Senegal and Seychelles in Nairobi.

We do feel bad for gorgeous model Rachelle Graham, truth be told, Papiss has stunned with his quick marriage, getting some heat about leaving Graham and getting married so soon. The were in a relationship, they first met in 2012 and according to some reports he tied the knot behind her back, telling her he was going on holiday to his home country. Bada-bing Bada-boom he’s married!

Papiss denies being in a relationship with Rachelle, so he didn’t see the need to inform her of his wedding plans.

What do you think of the new married couple? Congrats!