Meet Rob Steckley, the main man in Tennis these days! The 35-year-old WTA coaches 28-year-old Czech tennis player Lucie Safarova, who is currently battling for her life at the French Open semi-final against Ana Ivanovic!

Robert is originally from Canada, you might have heard of him during his tennis playing years. He was known to be a pretty good hitting partner a few years back.
According to his profile he began playing at age 11 and was coached by Istvan Toth. He prefers the hard surfaces and described several interests including Drums, Skate boarding, Surfing and Snow boarding. On social media he reveals he is “Professional tennis player turned filmmaker!” 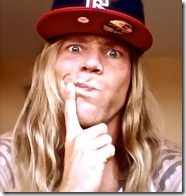 Lucie reached her first major semifinal at last year’s Wimbledon and sealed her sixth WTA title in Doha, earlier this year. Now the player is giving her all at the French Open. We might have discovered her secret weapon! During an interview she recognized how much her game had improved, crediting improvement to consistency, maturity. The blonde leggy player said:

“My game improved a lot throughout the last couple of years. I think we did the great job together with my coach, Rob, on my game and it’s just hard work and also maturing a little bit,”

Steckley backed her up saying: “She has always been in and out of the Top 20 but now it is a matter of her believing that she can stay and push further and further to reach the Top 10 and possibly the Top 5,” Steckley told Tennis Canada. “I think it has never been a secret that she has always had the game. She has got all the tools.” 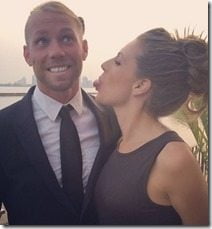 Something that is not a big secret is how hot, Rob is! Unfortunately for his fans, he is in a relationship with Jen Fiorini and if you wondered just how serious they are? Well, they have an adorable daughter together.