This lovely gal is Barbie Velez; an Argentine actress and according to some sources she is the rumored girlfriend of Diego Schwartzman. He is the young Argentine tennis player, who reached his highest career singles ranking of world No. 33 on August 14, 2017.

Diego, one of four children born to Jewish parents Ricardo and Silvana Schwartzman; was born on August 16, 1992, in Buenos Aires, Argentina. He started playing tennis at the age of five.

In addition to tennis, Diego also played soccer, he did it until he was 12, after that he stick to tennis.

He turned pro in 2009, but made his first  Grand Slam appearance at the 2014 French Open against the great Roger Federer; his first singles title came at the 2016 Istanbul Open.

As noted, Schwartzman might or might not be dating the actress Barbie Velez, she was born Barbara Velez on June 18, 1994; in Quilmes, Argentina, to Nacarena Velez and Alejandro Pucheta.

Diego said he dated Barbie a few years ago, but said he wasn’t dating her at this moment.

Ice hockey player for the Pittsburgh Penguins, Jarome Iginla, was a member of the … END_OF_DOCUMENT_TOKEN_TO_BE_REPLACED 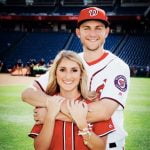