Meet lingerie model Berenice Schkair; she is the Argentinean model who dated soccer player Emiliano Sala. Her ex-boyfriend was a passenger on the single-engine aircraft flying from Nantes to Cardiff before it went missing on Monday, January 21, 2019. Emiliano along with the pilot David Ibbotson, 60.

The wreckage of Emiliano’s plane found on February 4, 2019, was lying 220ft down on the English Channel; inside the plane was a single body, which Dorset police later identified as Emiliano.

Berenice Schkair’s both Instagram & Twitter accounts are not a private account, but before she deleted her tweets and set it to private she posted heartfelt messages to Emiliano; she also suggested Sala’s disappearance was not an accident, but rather the work of the football mafia.

Emi, my heart is broken. I still cannot understand it. I’m destroyed, I feel pain, fear and anger for not being able to do anything. I know you’re strong. We are waiting for you.

‘I want to wake up and all of this to be a lie. Please investigate because I cannot believe this is an accident. Don’t suspend the search for bad weather when you only just found objects floating.

‘The thing I regret most is not having told you that you made me feel like; I haven’t felt in a while and I love you. Why does this misfortune happen to such a fascinating man full of projects, hard working, a good person dedicated to his job’.

“I feel impotent, I’m in a nightmare. I cannot stop thinking about you, Emi.” 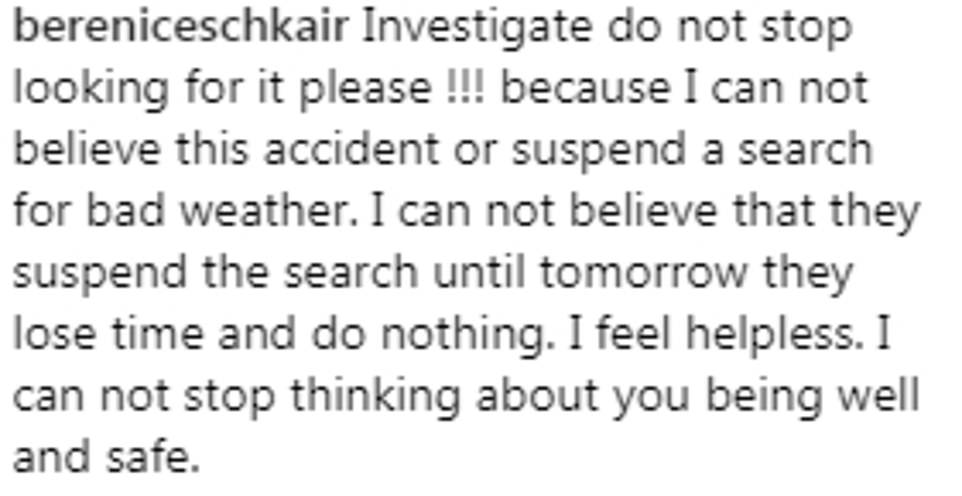 Berenice and Emiliano dated for some time before splitting up in 2018.

5’7″ Berenice Schkair, 27, was born in Partido Tres de Febrero, Buenos Aires, Argentina. She studied psychopedagogy but left her studies a year shy of graduation due to personal issues. She currently resides in Buenos Aires.

Back in 2016, she said she was hoping to take dancing and start a family; although she was single at the time.

I dream of starting a family; some media linked me to soccer players, but I’m not interested in fame because I’m a Wag; I’m single and I’m fine with that, I want to have a family that lasts forever.

She added that her dream was to walk the Victoria’s Secret runway and posed for their catalog.